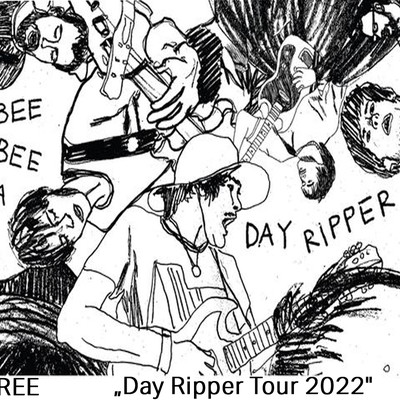 Bee Bee Sea
„Day Ripper Tour 2022"
19.07.2022 • Urban Spree
Einlass: 20:00 / Beginn: 21:00
VVK: 14,00€, zzgl. Gebühren
Tickets: https://www.greyzone-tickets.de/produkte/599
Bee Bee Sea formed in 2013 and soon started to get recognition for their energetic live shows. In 2015, Bee Bee Sea released their self-titled debut album (first pressing is now sold out) via Glory Records. During that year they toured Italy, Switzerland, France and Germany, supporting important artists such as Thee Oh Sees, Black Lips, The Night Beats and King Khan & the Shrines. In 2016, Bee Bee Sea released a 3 song EP named “3 songs and Jacques Dutronc” (Glory Records), on digital and cassette. Tracks were soon featured in major commercial campaigns including ads by Fiat, DC Skateboarding, New Balance and DMAX. Be Bop Palooza charted at #1 on Hype Machine.
Bee Bee Sea has been synced with commercial for X-Games and Pepsi. One of their track will be featured on ESPN Morning Show that summer. On 2020 Bee Bee Sea released their third and most vibrant album yet, “Day Ripper” wich will be bring on tour in July and played live for the very first time, due to the pandemic. Along with a strong positioning on streaming platforms, the album sold-out its limited edition vinyl during pre-orders. Music outlets such as Louder Than War, Under The Radar and Europavox included “Day Ripper” on their best of 2020. “Daily Jobs” has been nominated song of the day by KEXP and WFMU, two of the most important college and community radio in the US. Their music has been spinned on national radios such as RadioX (UK), Amazing Radio (UK), BBC1 (Jack Saunders), BBC6 (Iggy Pop, Amy Lamé), Radio3 (Spain), Vodafone.fm (Portugal), RadioEins (Germany) and hundreds of local, college and community radios all over the world.
In 2021 Bee Bee Sea performed at ESNS21, delivering their classic sweaty performance that streamed during the important music convention. ICE will bring Bee Bee Sea to the Italia Pavillion at SXSW21.