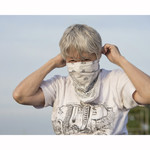 "One Week with 1UP": Opening at Urban Spree

“One Week with 1UP” is an exceptional exhibition of photographs and artworks by Martha Cooper, 1UP Crew, and Ninja K. to coincide with the publication of the book "One Week With 1UP". The show is only the second solo Berlin exhibition ever made by the legendary Berlin-based vandal graffiti crew 1UP after their first show at Urban Spree in 2014 - "I Am 1UP".

“One Week with 1UP” is a first-hand and behind-the-scenes account of the most important European crew of the 21st century.

The Opening Night will start at 19:00 with the vernissage of the exhibition and the release of the book in presence of Martha Cooper. A new screen print, "Letters of 1UP", as well as the brand new tees & hoodies will be also released. Open end outdoor party with Beathoavenz, That Fucking Sara, Sara Wave. At 21:30, special video release. On top: 1UP Flash tatoos in partnership with our resident Amor de Madre #Berlin & African cuisine by DeDeeDe.   Urban Spree Galerie presents: ONE WEEK WITH 1UP A Project by 1UP, Martha Cooper and Ninja K. Opening: May 9th, 2018, at 19:00 - open end Exhibition: May 10th, 2018 - May 27th, 2018 Tuesday-Sunday / 12:00-19:00 Info: contact@urbanspree.com