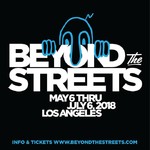 Beyond the Streets L.A.

Beyond the Streets is Roger Gastman’s follow-up show to Art in the Streets, the graffiti and street art retrospective that broke MoCA Los Angeles’ attendance record with 220,000 visitors. 7 years since the MOCA's groundbreaking exhibition, Roger Gastman invites 100+ artists to showcase their art and create immersive installations over 4000 sqm of industrial indoor and outdoor space in Los Angeles for what will surely become 2018's most ambitious show: Beyond the Streets. Beyond the Streets will be opening in Los Angeles on May 6, 2018. Gastman will not only be looking into the roots and historical figures of Graffiti and Street Art, but also take an in-depth look at just how expansive street culture has become in the worlds of contemporary art, photography and other mainstream pop and art movements. Beyond the Streets will focus on artists with a documented history of mark making and rule breaking as well as a current, robust studio practice primarily derived from the graffiti and street art movements. Beyond the Streets is not intended to be an historical retrospective but rather an examination of cultural outlaws who embody the spirit of the graffiti and street art culture. The exhibition includes well known artists whose work is influenced or inspired by these risk takers and whose efforts have elevated the movement to new heights.

Among the installations, we can mention a handball court complete with site-specific artwork by famed NYC artist Lee Quiñones drawing inspiration from his lion mural in 1982, FAILE’s Temple, is a highly interactive, life size construction of ceramic, steel, mosaics and prayer wheels that re-conceives historical references from sacred structures that invite play and contemplation from the audience, as well as a historical recreation of the Venice Pavilion, the legendary graffiti and skate destination in Venice Beach, in partnership with adidas Skateboarding. Roger Gastman is a curator, graffiti historian, urban anthropologist and collector. Gastman founded and co-published Swindle magazine with Shepard Fairey, co-authored The History of American Graffiti and co-produced the Oscar-nominated Banksy documentary Exit Through the Gift Shop.