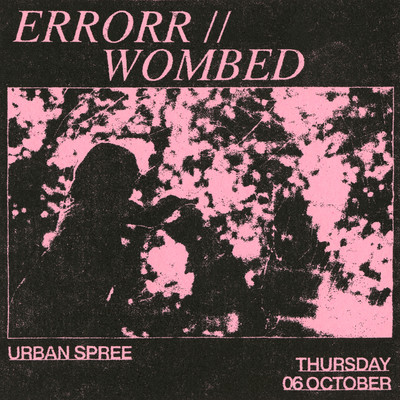 Fuzz, feedback, loud and quiet.
Two of Berlins finest underground acts come together on one night at Urban Spree. DJ's TBA.
--------------------------------------------------------------------
ERRORR
(Anomic Records)
Errorr was started by Leonard Kaage, who took the opportunity to start creating on a blank canvas with his own instrumentation, production and arrangement in 2019.The first demos were developed in his studio, whenever he found time between recording jobs and tours in Europe, Asia and the US. After a few months the characteristic sound of Errorr found its shape: Loud guitars and fuzz bass supported by catchy drum beats. Leonard's voice cuts through the mighty 'Wall of Sound' and transforms beautiful noise into straight forward song structures.
The Swedish multi-instrumentalist is also known as the producer and guitar player of The Underground youth and has worked with numerous other bands like The Brian Jonestown Massacre, Holy Motors, Kristof Hahn (SWANS), Tracy Bryant, Tess Parks, The Blue Angel Lounge and many more.
With Nick Mangione, Adriano Redoglia and Andre Leo (Medicine Boy, Wombed) joining him on Bass, drums and Guitar, the band has now developed into a 4-piece which incorporates a wide range of rock genres including noise-, post-punk and shoegaze elements and is inspired by a lot of great rock bands of the early 90s. Avant-Garde bands like Sonic Youth, My Bloody Valentine and The Jesus and Mary Chain are seen as pioneers in their raw and honest interpretation of rock'n'roll and punk rock.
--------------------------------------------------------------------
WOMBED
Wombed is an experimental music project led by Berlin-based, Cape Town-born musician, André Leo (formerly of dream noise duo, Medicine Boy). Birthed in the murky waters of 2020, the debut EP, Still Nothing, is described by Leo as ‘cough syrup blues’ and is a merger of his love for acoustic roots music and washed-out, unsettling ambiance. 2021’s Skinning Music is a blurry sound collage of dictaphones, Mellotrons, tube amps, guitars and tape hiss. These two self-produced EP’s mark the closing of the first cycle of Wombed. The forthcoming record, which is in the final stages of production, draws more from Leo’s adoring and inquisitive relationship with discordant, noisy rock ‘n roll music. It’s these new songs that he, along with Francis Broek (drums) and Adam Hill (bass) will present at their debut show.
FFO: Bad Seeds, Sonic Youth, BRMC