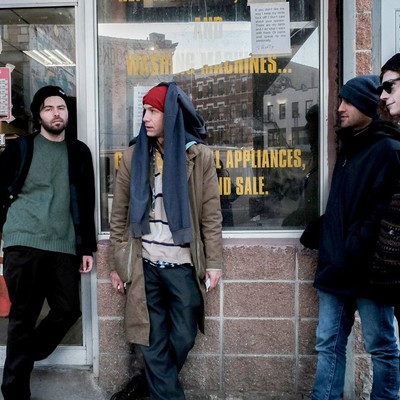 [youtube id="dE7MF4GSJKc"] WIVES 21.11.2019 Berlin - Urban Spree Doors: 20:00 Uhr, Start: 21:00 Uhr Tickets: www.greyzone-tickets.de/produkte/386 A new pearl has formed from the haze of the New York DIY scene: Wives. The band around Jay Beach (guitar, vocals), Andrew Bailey (guitar), Alex Crawford (bass) and Adam Sachs (drums) released their first song "Waving Past Nirvana" in March 2019, But behind "Waving Past Nirvana" there is no story about the legacy of Cobain, according to Jay Beach it's about something completely different: "Waving Past Nirvana" is a literal interpretation of the bodhisattva-one who has achieved the release, the awakened eye, and yet wants to trade it back for the painful life of desire because she/he/they predominantly feels compassion. This "entering back into the world" to fight a fool's battle is the essence of "Waving Past Nirvana", and the video depicts one young woman's journey along these lines. Musically the Slackers catapult us back into the golden 90s. The implied noise of Sonic Youth meets the nervous hooks of the Pixies and merges with the wonderfully necessary vocals à la J Mascis (Dinosaur Jr). If you are not completely averse to the reference bands mentioned above, you should definitely remember this formation. The quartet is currently working on their first album "So Removed", which will be released on 28 June via City Slang. But before that they will play some shows - including a concert in Germany. Let's hope for seconds, after the release. (Neolyd) FB EVENT