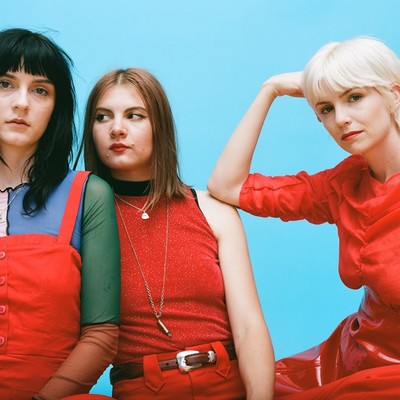 [youtube id="YKpbKcjVfTQ"]   Like all the best bands, Automatic found each other in an organic way. Izzy Glaudini (synths, vocals), Lola Dompé (drums, vocals) and Halle Saxon (bass, vocals) met in the DIY band scene of Los Angeles and started jamming together in 2017. Over the last year, they have become an important part of the L.A. Club circuit, sharing the stage with bands like Surfbort, Wand and Flatworms. On 27 September 2019 their debut album "Signal" will be released on Stones Throw / PIAS. Lola was born into a punk household (her father is Kevin Haskins, the drummer of Bauhaus) and joined her first band, the art-rock outfit Blackblack, when she was just 13 years old. Halle and Izzy met in local bands in the northeast of L.A.; Izzy was a guitarist and singer, and Halle liked to plug her fretless bass into a guitar amp. Unimpressed by the masculine energy of the local scene and the rock music on the radio - "pumped out like plastic bottles into the ocean" - Izzy changed guitars into synths and joined Halle and Lola in 2017. They called themselves "Automatic" after a song by the Go-Go's - the only (!) purely female band that ever wrote and recorded an entire album that reached number 1 in the charts in the USA. Automatics guitarless setup seemed to leave a void in the sound at first, but their interplay gave them strength and they took their place in the scene. Empowerment in the best sense. They refined their sound and, informed by Neu! and Suicide, combined their preference for dub reggae, motoric rhythms and gnarled synthesizers with their cinematic pop understanding. In collaboration with sound engineer and producer Joo Joooo Ashworth (FROTH), they started working on their GarageBand demos and their debut album. Their first single "Calling It" captures the feeling of drifting in an endless space, tearing everything apart and starting anew. Elsewhere on "Signal", songs speak directly from the band members' experiences: "Humanoid" and "Too Much Money" are reflections on boredom, misfortune and the disappointing falsehood of social media personae, while the title track "Signal" is about "being trapped in the drudgery of a shitty life/job and realizing that no one but yourself will save you from it." "Signal" is the title track of the band's album. A shocking near-death accident in her apartment inspired Izzy to write "Electrocution" - an experience alluded to in the cover packshot, which shows a switch on a red background. Izzy studied film at college and Halle used to work at the legendary video store "Kims Video" in New York, so it's no wonder that the band also mentions film as an important influence on their music. David Lynch and Dario Argentos in particular have left their mark on the ambiguous lyrics and eerie atmospheres. The red thread that runs through "Signals" is the feeling of fear and alienation, possibly one of the most formative experiences of the early 21st century: the feeling of being on the edge of the world. Or as Automatic put it: "The world is so fucked. I don't know how a musician could say: 'That's all great.'" FB EVENT