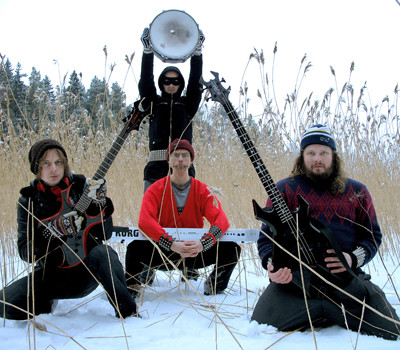 So excited to have two of the most mind blowing bands of today's music scene together in one place: If Circle, hailing from the remote small town of Pori, are no "cult band", the word will have to be re-defined: Formed in 1991 initially as a tribute act to the Britain's Loop (hence the name), Circle is the most prolific and mysterious force of the Finnish avant-rock underground. Constantly reinventing themselves, weaving hypnotic mantras out of relentless krautrock beats, heavy riffs, arty noise, dark psychedelia, and soundtrack-like beauty. Hard, chilly repetition has served as the lone unifying theme throughout almost 25 years of experiments. As Circle and under various other monikers (such as Falcon, Pharaoh Overlord, Pharaoh Overlörd, Motospandex and many more) they have released a disorienting host of albums on numberless micro labels, constantly confusing their fans with hazardous stylistic changes and highly hallucinatory live shows.

Camera became notorious for their hit-and-run style live concerts in Berlin subway stations - often stopped by the police, the "krautrock guerilla" developed their trance-inducing trademark sound which is propelling the shimmering surfaces and the blunt drumbeats of Hallogallo-period Neu! into a dystopian future. Their new and second album "Remember I Was Carbon Oxide" was released by Hamburg's Bureau B imprint to much critical acclaim at the end of last year.
Links: Circle
Feature: http://www.thestoolpigeon.co.uk/features/travel-finland-pori-circle.html Circle's founder Jussi Lehtisalo guides The Quietus through Circle's vast back catalogue: http://thequietus.com/articles/15220-the-strange-world-of-circle Jussi's Top 5 of Circle recordings: https://soundcloud.com/planetrockbooking/sets/the-best-of-circle/s-XIH9N Classic 2007 live footage: http://youtu.be/4FWftvvaVok Most recent: "Circle vs. Circle" from the appropriately named Supermassive Festival: http://youtu.be/BI69Zc-Z_ok
Camera:
Bureau B minisite http://www.bureau-b.com/camera.php Video: https://youtu.be/K9ZNFFGO3v0