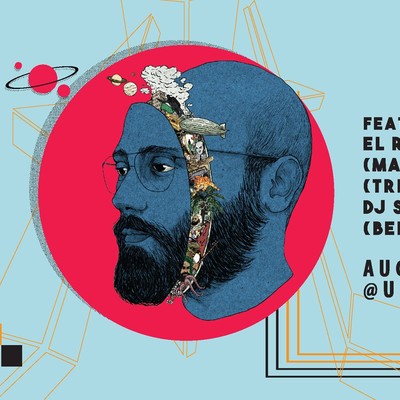 Line Up: 19:00 Doors open 20:00 DJ set | Shins-k 21:30 Live | El Rass 22:30 DJ set | Shins-k 23:15 DJ set | El Rass \\El Rass\\ In Arabic means (The head), also known as Mazen El Sayed, he is a rapper and a music producer from Tripoli Lebanon. He already has in his discography 5 albums, the newest being “Baad Al Hazimeh” (After defeat), in addition to more than 200 singles in collaboration with many other music-makers and rappers from the region. He is a member of the “MSKH” collective and co-founder of the label “Hamim”. El Rass’s work has gained fame during the last 7 years around the Arab world, especially for his dense lyrical content and the rejection of being confined to a limited set of topics or approaches. But also for an uncompromising spirit of expression, intertwined with a vision of rap as a free space for nuance and detail. He interacts with heritage as a source of inspiration, from within it, in continuity. While in form, El Rass makes his musical choices with a drive to push out of conventional formats, on the levels of arrangement and diversity in performance between singing and rapping. LINKS: https://soundcloud.com/el-rass-the-head https://www.youtube.com/watch?v=sHmiKKdcd5E https://www.youtube.com/watch?v=HlAB1o5zxkQ https://www.youtube.com/watch?v=sbI0oZ02uJg \\Shins- k\\ Hailing from the land of rising sun, SHINS-K has a unique musical taste and you never know what to expect next from him. He plays effortlessly between the borders of Bass Music, Hip Hop, Jungle, Dub, Techno, Noise or even traditional african and the middle eastern sounds, avoiding genre-fication and stylistic limitations. One of the curator of Arabic Hip-hop event/project, ''AIWA'' (supported by MusicBoard Berlin in 2016/2017). https://www.facebook.com/aiwaberlin/ LINKS: http://www.soundcloud.com/shins-k \\About /AL\ Berlin\\ /AL\ Festival Berlin is on the Music Board Berlin Festival Funding list for 2019. The /AL\Festival aims to connect Berliners who are interested in the Contemporary Middle Eastern Music Scene with musicians and music acts from the region, to create a temporal spatial opportunity to develop this scene in Berlin as a Contemporary Moment, regardless of margin spots on Eurocentric festivals or programs promoted for their empowerment value alone. We want to promote and empower this scene for its artistic value, while giving it its deserved unique space to develop further sustainably.