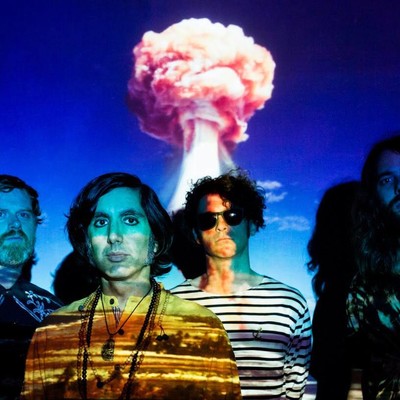 [youtube id="2lmEBa4I0so"] Elephant Stone 1 February 2020 Berlin, Urban Spree >> Tickets: bit.ly/ElephantStoneBLN Admission: 20 h / Start: 21 h _______________________________________________________ Elephant Stone announce their new album and go on UK/European tour in winter 2020 "Hollow" will be released February 14th on the London label Fuzz Club Elephant Stone, that's the highly respected sitar player Rishi Dhir, his long-time fellow musicians Miles Dupire (drums) & Robbie MacArthur (guitar) as well as guest musician Jason Kent (keys/guitar). The sixth album of the Psych-Pop-Creation, founded in 2009, will be released on February 14th. Regarding the album and the new single "Hollow World", Rishi says: "I'm sure I'm not alone with this feeling. If social media has taught us anything, it is that there are many unhappy people out there trying to find a way out. They are looking for meaning and something to believe in... or nothing to believe in. We all want the same thing, but we try to achieve it in different ways. It was with this in mind that we wrote and recorded our sixth album, Hollow. I wrote a song suite that tells of a world of unhappy souls who have lost touch with one another." The result is an ambitious, dystopian sci-fi concept album inspired by "The Who's" 'Tommy', Pretty Things' 'S.F, Sorrow' and the second side of the famous "The Beatles" 'Abbey Road'. In winter 2020 the band from Canada will go on a big UK & Europe tour, with many dates in hip cities - including Paris, Berlin and London. RBK FUSION presents: ELEPHANT STONE Europe Winter 2020 01 February 2020 - Berlin, Urban Spree (Admission: 20h / Start: 21h) Tickets are now available through Reservix, Tickettoaster and Koka36. FB EVENT