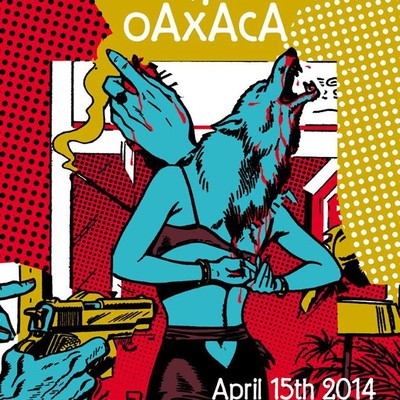 Italian weirdos strike with a vengeance. Whether you want to graze on darker pastures with Father Murphy´s dark blend of post-punk, experimental litanies and industrial-tinged psychedelia or you want to go full-out on oAxAcA´s free jazz punkiness, Urban Spree is the place to be on April 15th. Mark our words, you won´t regret it.

Father Murphy is the sound of the Catholic sense of Guilt. A downward spiral aiming at the bottom of the hollow, and then digging even deeper. After having furiously performed all over Europe and toured North America with Deerhoof, Dirty Beaches and Xiu Xiu, the new installment of their unique sonic saga will be a concept EP on Failure, to be release next January by Aagoo Records (US) and Boring Machines (ITA). Father Murphy, with three albums and a plethora of EPs and limited releases, over the years became one of the most mysterious and enigmatic musical entities coming out of Italy, part of that community that Simon Reynolds started to call the new “Italian Occult Psychedelia”.

oAxAcA was born in Cuneo from the blues funk band Stylefire, formed by Mattia Bernardi (drums) and Alberto Boto Dutto (guitar). After 6 years the band goes to the complete absence of structure, instigated by american free jazz, the new thing, James Brown, the fear for mathematics, Coltrane… In the meantime they were joined by the musicians Tato Filipazzi (bass), Ivan Grosso (percussion), Michele Lone Guglielmi (rhodes) and Diego Viada (trumpet). They recorded their first LP and a live studio session in 2010. In October 2012, the band is in the studio for a new recording. White weapon punk jazz: free improvvisation for a rhythmic forest. In each concert.