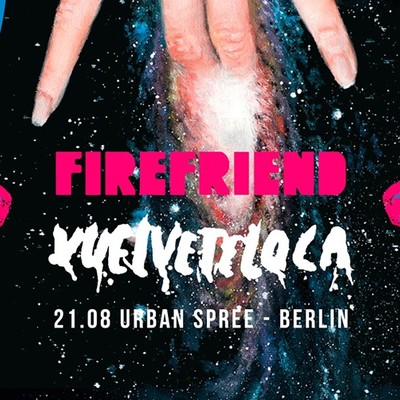 [youtube id="6hbm4ZxVdRY"] Firefriend (Brazil) and Vuelveteloca (Chile) on their journey towards Fuzz Club Festival in Eindhoven, they decided to stop in Berlin town for their first time to deliver what they do at their best. This double Concert will Psych your mind away! An evening like few others... Promoted by Drrk’s Secnd & Sandra Fiz . Firefriend (Cardinal Fuzz Records) (Brazil) ---> Listen “There was a thread in American music in the late 1960s that someone untangled across the U.S., then stretched over to Europe, where it took root in 80s shoegaze. It ties together bands as disparate as the 13th Floor Elevators, the Velvet Underground, Sonic Youth, Mazzy Star, Blonde Redhead, and the Jesus & Mary Chain. It’s noise rock or math punk or psychedelic or shoegaze or doom: It’s the down-tuned sound of chaos and beauty, and while no one was looking, it also worked its way through the Americas and took root in Brazil under the name Firefriend. Vuelveteloca (Fuzz Club Records) (Chile) ---> Listen Chilean rock band formed in Santiago in 2006. They’re recognised for their explosive and powerful live show. Along their five albums, you can hear some psychedelic rock, stoner, krautrock and space rock.Throughout their work , they have released Vuelveteloca (BYM 2007), Jinete Galáctico (BYM 2010), Días de Calor (BYM 2012), Pantera (BYM 2015) y Sonora (Fuzz Club 2017). They’ve played some international festivals like Liverpool Festival of Psychedelia, Monkey Week (Spain) and Festival En Orbita (Chile), sharing stage with bands as Spiritualized, Dandy Warhols, Dead Meadow, A Place to Bury Strangers and Pond, among others. In 2017 the band released their fifth and critically acclaimed album Sonora, with London label Fuzz Club Records, and are preparing shows around the world, including Levitation Festival in Austin. FB EVENT