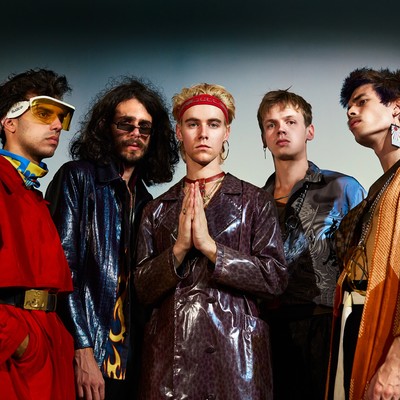 [youtube id="LGs4gupmdp0"] HMLTD Special Guest: Amigdala + Show Boy 28.02.2020 Urban Spree Doors: 20:00 / Start: 21:00 Tickets 14€, + fees / At the door 17€ … presented by: GreyZone Concerts & Promotion, Powerline Agency, Musikexpress, ByteFM, MusikBlog & Soundkartell As anyone who has been in attendance at one of their live shows thus far will testify – where the venues are decorated from floor to ceiling with glitter, doll parts, glamorous pictures and whatever else the six members of the band have dreamt up in the days before – HMLTD are a band of grand ambitions. “Our plan has always been to connect on a much, much bigger scale than this,” says singer Henry. “We want to make big pop songs that get on the radio, in the papers, we want to be pop stars. And I don’t see why that is something that we should be embarrassed about.” “That’s why we put so much into our videos, and our aesthetic. That’s why we signed to Sony, and not to an indie label. We have always thought of ourselves as a pop group, not an indie band.” adds guitarist James. So, they connected with the famous Producer from Los Angeles, Justin Tranter (worked with Selena Gomez, Gwen Stefani, Britney Spears and Justin Bieber) for their new Album. The first fruits of this new collaborative way of working will be ‘Pictures Of You’: a giant, titanic pop song with undeniable, super-infectious hooks that, rather than sounding like the work of Justin Tranter, still bears all the unmistakable hallmarks of an HMLTD creation. “And that is one of the more straight up songs,” says James. “The others are quite avant grade and strange, and totally unlike anything you’d hear on the radio at the moment, but still very pop, which is very exciting.” “Basically,” Henry concludes, “we just want HMLTD to matter on a massive scale.” Listen here: http://bit.ly/32RR30R FB EVENT