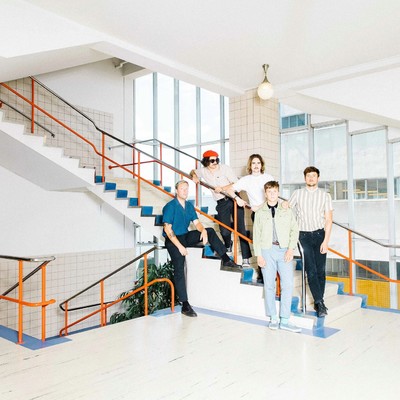 [youtube id="M3qPULFcMDg"] Iguana Death Cult Special Guests: Tanning Bats 14.11.2019 | Berlin - Urban Spree Doors: 8:00 p.m. Start: 9:00 p.m. ... presented by DIFFUS Magazine The Rotterdam five-piece Iguana Death Cult first made a name for themselves with a twisted and hard-core garage punk including a hint of psychedelia, then the quintet grew into a band that incorporates post-punk, Krautrock, New Wave, soul and disco. Their second album "Nude Casino" will be released on October 25th on the label Innovative Leisure from LA. It shows the more top-heavy side of her songwriting and her sense for the absurd. The frenzy of the early years can still be felt today: the band is a barely controllable force of nature. They have made their way from dark doldrums to the SXSW, and they prove that defiant dilettantism and real ability can be perfectly combined and lead to success. Opschoor used to play nimble flamenco ornaments on guitar, but would have broken his fingers on blues riffs. With Reek it was exactly the other way round: From wonderfully primitive punk rock he worked his way up to sophisticated retro soul, psychedelic rock and acid jazz à la Art Blakey. And so they meet in the middle, where Boer's brawny bass competes against Van Opstal's jazz-influenced licks. Because the music scene in the Netherlands is very small and familiar, the rise of Iguana Death Cult to a legendary live act took place at an incredible pace. There is no difference for the band between occupation and hobby, also because of that she was able to gain a big fanbase quickly. Her debut album "The First Stirring of Hideous Insect Life" was released in 2017. In comparison, the successor "Nude Casino" sounds rather brittle and unembellished - a sceptical sound that also questions their own former hedonism. Jeroen Reek lets his neuroses run wild and oscillates between wild waking dreams and the narrow limits of reality. His lyrical abilities come to the fore on "Tuesday's Lament", the heart of the album: The song is a monologue in five parts, which self-confidently and in a good mood deals with such difficult topics as mortality and faith. The occasional seriousness that blends into the sound and lyrics doesn't harm the daring of Iguana Death Cult, like the band that has grown into a quintet through Jimmy de Kok on keyboard. from the first note on. "Nude Casino" evokes claustrophobic and absurd moods and is dedicated to themes like sleep paralysis ("Half Frisian") and lost innocence ("Castle in the Sky"). These songs are based on earthly fears like neuroses and conflicts. That's why the album is permanently jerking with nervous energy, which also comes from the wilder songs dominated by heavy hooks like "Carnal Beat Machine" with its dry disco pulse. Iguana Death Cult celebrate the art of rocking the shit and turning everything on 11. They dig their claws into the music and don't let go. And they also have fun. Tickets: https://www.greyzone-tickets.de/produkte/404 FB EVENT