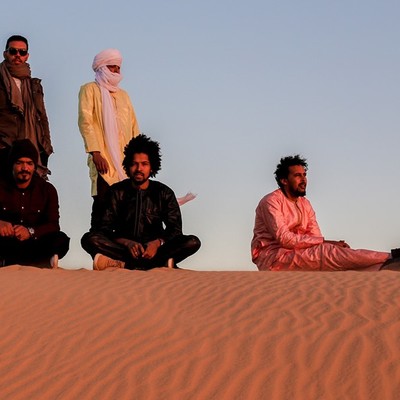 [youtube id="alL-L7H4bBg"] The David Watts Foundation presents: IMARHAN (ALG) - Tuareg funk, fuzz, disco, rock + Support Sundays & Cybele (JAP) - psych, kraut When Imarhan released their self-titled debut album in 2016, their tender, soulful, intense vision of a genre of music that was already flooded with talent and exposure still managed to float to the top and be heralded as a pivotal record of the "New Wave Of Tuareg Music". "Temet" is a huge leap forward in the creative sound and production for the band. Whereas their debut was anchored in the meditative desert blues tradition, Temet blows clear of any such notions, finding bounce and drive by stirring their sound with funk, fuzz, disco and rock. This is not an alien mood to the band: any of the (thousands?) of people who have danced at their live shows will attest to the disparity between their emotional and thoughtful first release and the raucous, ecstatic live shows the band ripped through, for hours at a time, in their 2017 tours. While "Temet" is decisively more eclectic than their debut, their wisdom and singular vision is as manifest as it was in their first offering. Imarhan's experience as a touring band since the first album has only honed their focus and meaning behind their music: Their focus in this case is a Nomadic traveller's reflection on today's struggles. "Temet" in Tamashek means "connections" - It's an energetic wake up call for unity, reminding people that we are all are connected and that only through the acceptance and uptake of this union will we be able to solve the troubles all cultures seem to be dealing with in this important moment in time. "People should love each other. They need to know each other, we need to know each other, everyone should get to know their neighbour. We need to have the same approach as our elders. You will stumble across an old man who knows the world and will hand down his knowledge to his children." Iyad Moussa Ben Abderahmane – aka Sadam FB EVENT