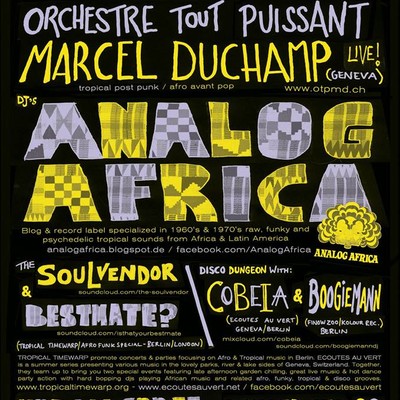 Part 2 of 2 very special nights of polyrhytmic music from across the globe!

IN BAD WEATHER THE NIGHT STARTS INDOORS AT 21:00

It starts at 6PM with the djs in the garden, some drinks and food under the trees, hopefully with a nice sun dawn over Warschauer on top.

Later at 21:30, ORCHESTRE TOUT PUISSANT MARCEL DUCHAMP will play in the concert room . This 6 piece band blends tropical post punk & afro-beat avant pop into their own musical brew. A captivating one of a kind band led by an extraordinary vocalist, featuring musicians on marimba, double bass, drums… hailing from Belgium, France & Switzerland, they just released a new album on Red Wig/Moi J'Connais. It is no coincidence that the band uses the name of one of the biggest dynamiters of 20th century art. Like him, it is deeply unconventional. Its name and dancing energy also come from legendary African orchestras like Orchestre Tout Puissant Konono n.1, OTP Polyrythmo… taking the audience to unknown and exotic jubilating bazaars.

Following the concert, the heat is not going to drop by any means, with the ANALOG AFRICA SOUNDSYSTEM taking on the decks. Together with his partner Pedo Knopp, Samy Ben Redjeb runs his highly influential blog & record label specialized in 1960's & 1970's raw, funky and psychedelic tropical sounds from Africa & Latin America. They will be supported by TROPICAL TIMEWARP's own djs in the main room + COBEIA & BOOGIEMANN playing Disco, Boogie, Italo… in the disco dungeon!

We very much look forward to seeing your smiling faces and happy feet down at our Shrine!