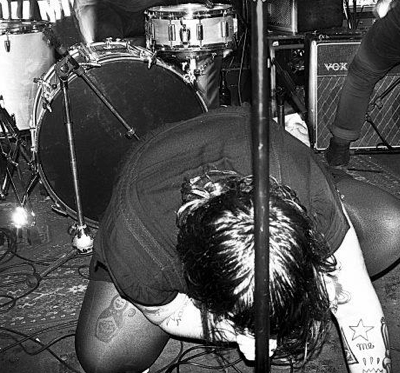 J.C. Satàn is the meeting between the talented kid Arthur (Polar Strong, The Meatards, Crane Angels, etc.) from Bordeaux and Paula from Torino Italy a drawer, dj and booker of underground shows.

They were noticed already from their first LP “Sick Of Love” (Slovenly Record –USA- 2010) followed by their excellent second LP “Hell Death Samba” (Slovenly Records – 2011) which had major critical and public success. Between those albums they have done various collaborations with groups as Le Pecheur, Vermillion Sands and with the french label Born Bad Records. For their third album, “Faraway Land”, the group joins the young and talented Parisian label Teenage Menopause (Catholic Spray, Prince Harry, Jack of Heart).

As usual the band refuses to fall into repetition and instead travels out of the comfort zone. They are exploring the musical landscapes of  Pixies and The Queen of the Stone Age but never losing their own sound.

J.C. Satàn is, with the audacious and perplexing Faraway Land, blowing up the rules of the garage music.

For fans of Thee Oh Sees, The Feeling of Love, Ty Segall, Queen of the Stone Age, Pixies, Moldy Peaches …

Get your tickets Here !