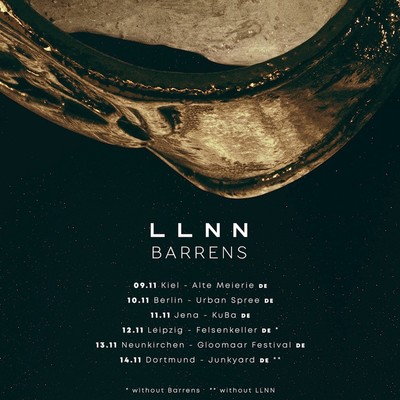 LLNN from Copenhagen redefine the term "heaviness" with their new album "Unmaker" (09.2021, Pelagic Records): a massacre of slow, driving grooves, massive guitar walls breaking through the black cloud cover from below & incredibly aggressive vocals and synths - suitable for post-apocalyptic soundtracks. No wonder the band finds inspiration in composers like Brad Fiedel, Vangalis, John Carpenter or Stanley Kubrick, as well as in Sci-Fi / Horror Games like Silent Hill, Dead Space or Halo & Limbo.

BARRENS from Gothenburg released one of the heavy post rock highlights of the year last year with their instrumental debut album "Penumbra", which found its way into many year's end lists from "Cvlt Nation" to "Where Postrock Dwells". This is not the kind of friendly, pretty-dreamy post rock, but heavy yet catchy instrumental music that fans of Russian Circles, PG.Lost or Caspian will get excited about. As Scraps Of Tape, two members already have 20 years of touring experience, but with BARRENS it will be an absolute debut!