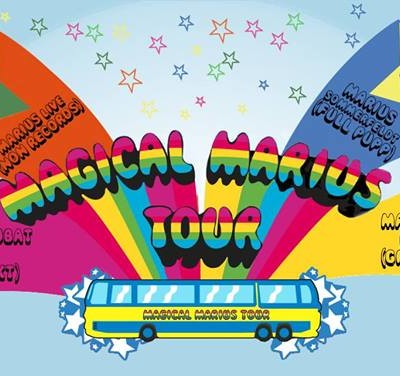 Moved by being part of several bland line-ups in clubs around the world, a group of young electronic producers is keen to bring a rather crazy concept to four European clubs. What first started as a running gag while meeting another Marius on the road, or discovering a Marius online with surprisingly similar sounding productions, soon became a serious project that all four of them were up to realize.

The MAGICAL MARIUS TOUR will take them all on a tour throughout Europe, with stops at everyone's home - so every Marius has his own hometown show!

MARIUS HFS from Non Records will play a live-set at every stop. His cosmic surfer-sounds may sound as if he's a sample-nerd, but he's actually playing all the instruments in his Amsterdam studio, so we can expect a lot of gear on stage. MARIUS SOMMERFELDT is part of SOMMERSTAD, a disco-duo from European disco-capital Oslo. And guess what - Prins Thomas already signed them on his Full Pupp imprint. The line-up comes to completion with a Cologne bromance: MARIUS BUBAT from the Kompakt-signed duo COMA, which combined their techno-pop roots with a lot of playful percussions on their 2013 album, and his studio fellow MARIUS LAUBER a.k.a. ROOSEVELT, who just released his first EP "Elliot" on Joe Goddard's label Greco-Roman, will both play a DJ-set and reveal where their more club-orientated influences are coming from.