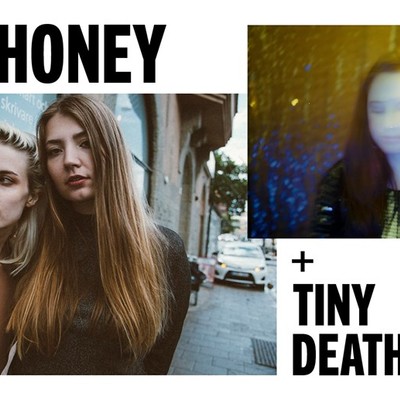 [youtube id="-zZEckgXg14"] Pale Honey + tiny deaths 30.10. Berlin, Urban Spree Admission 7:00. Start 8:00. PALE HONEY Pale Honey are Tuva Lodmark (guitar and vocals) and Nelly Daltrey (drums). Their debut EP 'Fiction' quickly attracted attention and led to festival shows in Germany and the UK, followed by a longer European tour in spring 2015. In May of the same year, the band released their self-titled debut album 'Pale Honey', which was highly acclaimed both internationally and at home in Sweden. The band was featured in a variety of prestigious media including Line of Best Fit, Stereogum and Consequence of Sound. They were also called "Breaking Act" in the British Sunday Times: "Tuva Lodmark and Nelly Daltrey eschew the synth pop most often associated with their country, favouriting instead a White-Stripesian voice-drums-guitar spareness, with a plinky keyboard sometimes thrown in, that suddenly explodes into violentcolour... brilliant". Pale Honey were nominated in the category "Newcomer of the Year" at the P3 Goldgala in Sweden after the release of their debut album, and also in three categories at the Swedish Gaffa Prize. The second album "Devotion" was released in 2017, followed by tours in Scandinavia, Great Britain and Germany and several summer festivals (such as Roskilde). The singles "Get These Things Out Of my Head" and the ABBA cover "Lay All Your Love On Me" were played on high rotation in Sweden and Denmark and also received strong support from Spotify. "Devotion" was nominated at the P3 Goldgala in Sweden and the band won a prize for the album at the Swedish Manifest Galan. The band is now in the studio working on their third album which will be released in early 2020. TINY DEATHS Tiny Deaths is a dream pop duo from Minneapolis and Brooklyn, consisting of singer Claire de Lune and producer Grant Cutler. Their debut album "Elegies" was released by de Lune and Cutler in February 2017. Tastemakers like Stereogum, The Guardian or PopMatters quickly became aware of the duo. Their sound reminds of bands like Beach House, Phantogram or Purity Ring. The two musicians couldn't be more different. Cutler has a background as an electronic and ambient producer, while de Lune has more RnB influences. Together they create a unique sound of powerful basses and soulful vocals. FB EVENT Tickets here