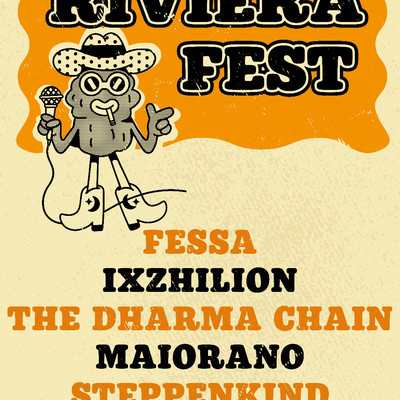 RIVIERA FEST is a jubilant celebration of Berlin’s local psych, synth and rock’n roll scene! Please join us for a wild night of the city’s biggest prospects from all over the world - a loud, dirty demonstration of the vast spectrum the city has to offer in 2023.


STEPPENKIND
Steppenkind is building a bridge between nightclubbing and live concerts. The Berlin Trio is merging a variety of synthesizers, electronic and acoustic drums, mesmerizing electric guitars and distinct spoken word on top, all performed live. They can be soft, psychedelic and emotional with warm bass-drones, echoes and jazz drums, but it can also fully escalate into Berlin-techno infused raves and improvised krautrock. The lyrics are delivered with intensity and an immersive stage presence by Irish native Brendan Cleary. Live drums as well as uncountable sequencers, arpeggiators and cables are handled by the amazing chemistry between Hotte Schulz and Can Winter, who have been making music together for a long time now. Early 2018, they released their 7-track debut album Walk Along Your River. Since then the band has been playing consistently in clubs in and out of Berlin almost every month. They've also been playing at underground and overground festivals such as Fusion, Wyspa, Solarium, Funkloch, Sublet (Jerusalem) and many more.
https://www.youtube.com/watch?v=xHU4jrieS_M


THE DHARMA CHAIN
"The Dharma Chain are a 6-piece psychedelic rock & roll band from Byron Bay, Australia who have recently relocated to Berlin, Germany. Blending raw elements of 60s garage rock with the transcendent chaos of 90s shoegaze, The Dharma Chain have synthesised a sound uniquely their own. Since forming in 2020 the band have been on a singular mission to spread their reverb-drenched voice across the world, which ultimately resulted in relocating all six members to Berlin in late-2022. Since moving the band have signed with the Berlin-based label Anomic Records, and are in the process of releasing a brand new album in 2023."
https://www.youtube.com/watch?v=D7dLE5JTxWU


MAIORANO
Frontman Alex Maiorano and drummer Alessio D’Alessandro met at the tender age of 14 in a small town in Italy ,an age made less tender as they started running with the wolves in the local punk scene and cut their teeth playing in many of its bands. In 2011 they left their troubles and their mamas’ cooking behind and swapped their sleepy town in Italy for the big lights of Berlin to pursue a career in music. Finding themselves in Babylon, they quickly threw themselves into the fray and, after they met Nico Battistelli and Mick Del Grosso put a band together that played everywhere from the dirtiest of dives to the grandest of halls. Wherever they play, their rock ‘n’ roll sound and the bacchanal frenzy of their performance stays with those who were there. Soon after, they released the album Glorious Days, the success of which took them on the road touring across Europe, the UK and Australia. On the road home, Covid reared its ugly head and Alex and Nicola found themselves without their other bandmates, moonlanded in a Berlin desert. So they eked out their survival while working on their new sound, drinking at the oases of Italian songwriting, soundtracks from old movies from the 70’s, warm and catchy 50’s melodies, modern garage dream pop sound,and groovy beats that all come together in their latest album Luna Nova, crafted by nothing but the boys and producer Nene Baratto ,a guitar and a mini Korg - simple, but enough to catch the eye of Swedish label Something Beautiful.
https://www.youtube.com/watch?v=mBNbToIvSxs

IXZHILION
Beyond far away stars and distant galaxies, out where no human has ever gone before, the crew of the ixzhilion 1 is preparing for the ascend into an unknown world. Time is running out as mother earth is dying and in attempts to save the human race, expeditions and rangers are venturing out into the deep space in search of new planets, planets where man can settle and where they might find a new home. Only guided by hope and vague signs, the crew of the Ixzhilion 1 has been tasked to seek out remote and mysterious territories of the vast cosmos and to explore the far away region known as Orion. On the border of the Final Frontier, they make their flight through the deep dark abyss in one final attempt to give hope to planet earth and to save the human race from Extinction.
https://www.youtube.com/watch?v=YfqzpDkmCYc


FESSA
Fessa is a feminist, DIY solo project, born during the lockdown of 2021. Hidden behind pop sounds are messages of self-love, fights against patriarchy, assertion of rights, anxieties and mental disorders.
https://fessa36.bandcamp.com/releases


Dj Jimmy Trash ♡
Australian musician, film maker, festival curator and journalist Jimmy Trash has been the lifeblood of Berlin good times for 16 years. A rabid vinyl collector, his research work with afrocentric record labels, digging tours through Slavic and Balkan countries and love of unknown disco bangers from the world over have gained his sets a notoriety for their passion and curiosity.