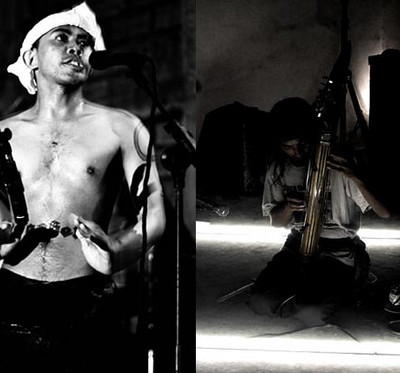 Morphine and CTM are extremely pleased to announce an impromptu gathering with Senyawa, an Indonesian duo. They will be supported by live apperances from Morphine’s Rabih Beaini (aka Morphosis) and Grün, and DJ sets from PAN’s Bill Kouligas, and Shackleton – all friends or fans of the duo’s work.

Senyawa uniquely manage to embody the aural flavours of Javanese music while exploring the framework of experimental music practice, pushing the boundaries of both traditions. In doing so their music strikes a perfect balance between their avant-garde influences and cultural heritage to create truly contemporary Indonesian music. Following several Indonesian tours, Senyawa’s mesmerizing live show quickly attracted considerable attention, and was followed by numerous invitations to perform at festivals in Australia and Europe. → http://senyawa.tumblr.com

Berlin-based percussionist and electronic music producer Daniele de Santis appears with a supporting analogue set as Grün – a project dedicated to exploring the colour Green as a portion of the light spectrum as well as archetypal symbol of what is commonly referred to as “nature”. An organic sonic creature that takes shape by controlled interactions between custom-made analogue sythesis modules, field recordings, and acoustic piano parts, Grün’s live improvisation gives life to a deep-bass sonic form resembling over-amplified microbiological worlds. → https://soundcloud.com/grunsound

DJ and producer Bill Kouligas stands behind the landmark electronic and experimental music imprint PAN, which he founded in 2008. A label that quickly garnered praise internationally, PAN does not subscribe to a singular style; rather, it identifies unorthodox expressive voices from different generations and scenes, bringing them into dialogue and exploring their intersections and the ways they reference one another. → http://p-a-n.org

Lebanese-born producer Rabih Beani is known for his grainy, imaginative analog techno and sonic explorations under his own name as well as his Morphosis moniker. While his productions join the dots between dancefloor, raw, elementary electronica, improv and jazz, his Morphine Records label has put forward an equally avant-garde selection of techno from the likes of Madteo, Hieroglyphic Being, and Anthony "Shake" Shakir. → http://www.morphinerecords.com

Lancashire-born producer Sam Shackleton, now resident in Berlin, emerged in the mid 00s just as dubstep began its international spread. He operated the influential label Skull Disco with Appleblim from 2005-08 and launched another imprint, Woe To The Septic Heart!, in 2010. Shackleton played in punk bands when growing up and brings the DIY, no-holds-barred ethos to his solo work while embracing an idiosyncratic darkness and fragility. Since his earliest record – Stalker, released as a single sided 7” on the Mordant Music label in 2004 – Shackleton has been an outlier. His singular approach to music making sets his productions apart from dubstep and other genres; he crafts an identifiable aesthetic without shuttering his sound into a particular style. One of the most successful “crossover” stories of dubstep, Shackleton has collaborated with Ricardo Villalobos, T++, and others far removed from South London’s bass scene. → https://soundcloud.com/shackleton