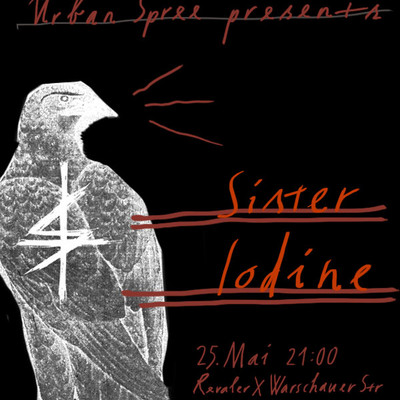 French pioneer experimental rock band formed in the early 90's by Lionel Fernandez, Erik Minkkinen and Nicolas Mazet, Sister Iodine is a rare band who release now their 5th studio album "Blame". Originally born on the ashes of no wave, their music searches through some sort of terminal confusion between rock and chaos; colliding to original raw and atonal no wave, their primitive love of noise music, eruptions and assaults coming from free music; tapes collage, a bitter moisture humected in industrial music, and maybe even poisonous climaxes taken from black metal influences.

Berlin-based composer and saxophonist André Vida has performed widely as a soloist and has collaborated with a diverse group of artists including Anthony Braxton, Kevin Blechdom, Tarek Atoui, Hildur Gudnadottir, and Jamie Lidell. He has worked closely with Anri Sala on multi-media installations at the Serpentine Gallery in London, the Roman Ampitheatre in Arles, and the Museum of Modern Art in Louisiana, Denmark. Vida has been invited to create works focused on the medium and materiality of scoring for The Tri-Centric Foundation, Global Art Forum 7, the 8th Berlin Biennale, Eyebeam, and the European Sax Ensemble. These works include explorations of interactivity, animation, lighting, and clothing design as elements of a compositional system that refocuses the physicality and performance.