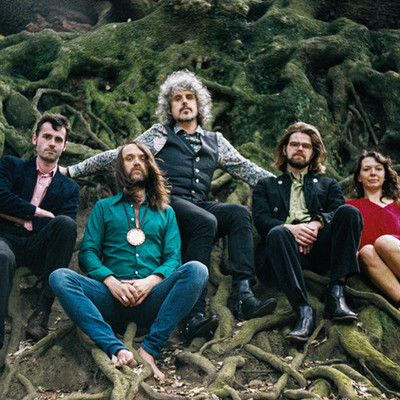 Tau & The Drones Of Praise
31.10.2022 • Urban Spree
Einlass: 20:00 / Beginn: 21:00
VVK: 16,00€, zzgl. Gebühren
Tickets: https://www.greyzone-tickets.de/produkte/627
'Misneach' is the kaleidoscopic third album from Seán Mulrooney and his Ireland meets Berlin ensemble. Ecstatic folk-psych that full embraces the natural world and living ancestry, through joyful experimentation and deeply rooted sonics. An inspired soundscape that echoes eclectic and eccentric atmospheres: traditional Irish folk, outsider pop, global sacred music and drone rock.
Features guests from Tindersticks, Clannad as well as Irish troubadour Damien Dempsey.
"It Is Right to Give Drones and Praise" is the first single from the album. Tau & the Drones of Praise bandleader Seán Mulrooney tells us this about the track:
"I was sitting in front of the fire one evening, messing around with the accordion when the melody jumped out at me. I had intended it to be a sparse, minimalistic drone with very little instrumentation. Come recording time, skip a few months and the band are sitting in the control room figuring out what is the best approach. All the musicians hearing different things. I could see my long term collaborator Earl Harvin (Tindersticks) working out a beat. In his wonderfully underplayed fashion, he said "Hey man, I got something". As soon as he played the beat the song whisked itself together in literally two hours. Robbie Moore came up with the bassline on the spot, Andy Heib, the wonderful hook on the harmonium. The shimmering vocals are sung by Nina Hynes and Kenichi and the Sun. It was recorded in less than a day. Magic. The inspiration for the song is a dialogue between the standing people, the trees and humans. The opening part of the lyrics is taken from an ancient Portuguese poem. The tree here reminds us of all they provide, "the beam of your house, the board of your table, the shell of your coffin“."