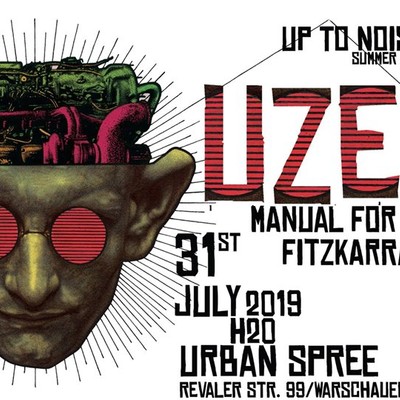 [youtube id="SGfWoaGfNe0"] Zeta kids proudly present: Up to Noise II (Summer Edition)
UZEDA
Uzeda (IT) is a four piece band from Sicily formed in 1987. "Quoqumque jeceris stabit", their 7th studio album have just seen the light on July 12th, it was recorded and mixed by their longtime friend and collaborator Steve Albini, who also recorded four of their previous albums over the last three decades. Their name is linked with bands such as Shellac, June of 44, Don Caballero and others within those who shaped the corrosive sound of contemporary noise, punk, math and post-rock music.
https://uzeda.bandcamp.com/album/quocumque-jeceris-stabit
https://www.youtube.com/watch?v=u6aA6S257Vc&fbclid=IwAR1B6jI2jvOrlgERAnMXvgFBtLiJ92Vuia-rjbmcDowxEV2EdktI0uzegGo

Fitzkarraldo
The matrimony of the insectile guitar riffs of James Anderson (UK) and the thudding drums of Emanuele Calì (IT) join forces and create Fitzkarraldo. Beginning of 2018 Riccardo Scaramagli (IT) joins the band. Like the Herzog film after which the band is christened, Fitzkarraldo is a raw offering which stands groaning even if it isn’t wanted.

Manual for Errors
Manual For Errors is one of Manlio Maresca’s (Squartet, Neo) many projects: this time, a man and his guitar in the land of electronic music, complete with drum machines, synthesizers and samplers. He’s concerned with his own corrupt aesthetic: the unpredictability of chaos, where the mistake is always coherent.   FB EVENT