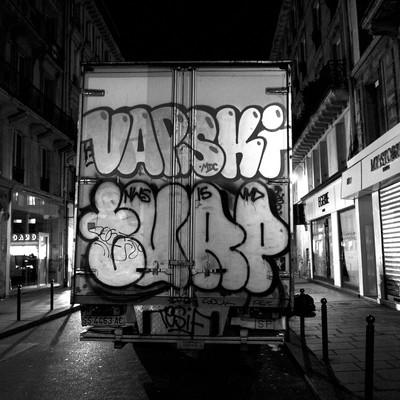 Book Launch: "The Graffiti Trucks of Paris" by Marc Vallée

Urban Spree invites you to the Berlin launch party of The Graffiti Trucks of Paris by Marc Vallée. London based documentary photographer Marc Vallée is back at Urban Spree on Friday 21 July 2017 to launch the second edition The Graffiti Trucks of Paris with a photographic installation of images from the photozine. [caption id="attachment_13226" align="alignnone" width="1400"]

PARIS, FRANCE – 26.11.16. A truck covered in graffiti on Saturday 26 November 2016 in Paris, France. (Photo by Marc Vallée/marcvallee.co.uk) (c) Marc Vallée, 2016. All rights reserved.[/caption] “The pictures here highlight how artists have brought the creative activism of subversive graffiti into (or onto) these commercialised infrastructures of urban mobility. As trucks and vans move consumable goods of the elite urban economy around the city, they carry with them the viruses of activism. Like the New York subway trains in the 1970s, the graffiti trucks of Paris are a mobile gallery of graffiti and its affront to the sterile spaces of urban commodity movement.” – Dr. Oli Mould. With a foreword by human geographer Dr. Oli Mould The Graffiti Trucks of Paris was published in March 2017 and featured in Huck Magazine, HERO Magazine and Tate Britain acquired a copy for its library collection. [caption id="attachment_13229" align="alignnone" width="1400"]

PARIS, FRANCE – 20.01.17. A truck covered in graffiti on Friday 20 January 2017 in Paris, France. (Photo by Marc Vallée/marcvallee.co.uk) (c) Marc Vallée, 2017. All rights reserved.[/caption] Come join Marc for a beer plus he will be signing copies of The Graffiti Trucks of Paris plus many of his out of print zines and photobooks including Vandals and the City and Writers.   Urban Spree Galerie Revaler Str. 99 10245 Berlin Friday, July 21st, 19:00-22:00 Free Entry FB Event