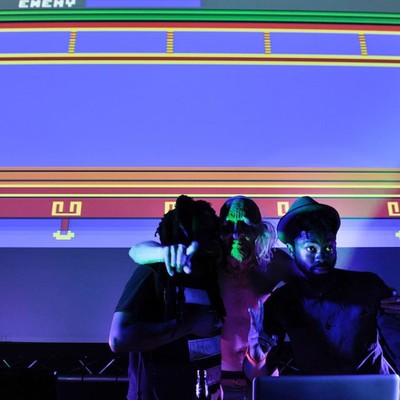 The official closing party of the A MAZE. Indie Connect Festival in collaboration with Bleepstreet celebrates with an amazing lineup the rise of the Indie Games. Ultrasyd (FR) - LIVE After several years of lurking around, Ultrasyd has been active in the Demoscene (as a member of Brainstorm) and the Chiptune scene since 2009. He produces music in various styles, ranging from classic demoscene Chiptunes to Electro and Metal. For 8bit music, he uses Amstrad CPC, Amiga, Game Boy, Master System, MT32, Commodore 64 ... with a slight preference for the sweet sound of the Atari ST. He made his first steps on stage at Blip Festival New York in 2011. Since then, he has played several chip shows like Bit'Em All [CH], Eindbaas [NL], Supergalactic Microparty [FR], various demoparties or Blip festival Tokyo 2012 [JP]. On stage, he delivers a mix of chippy melodies, energic basses and electro beats, all composed on an Atari STe and a Game Boy. https://soundcloud.com/ultrasyd https://www.facebook.com/pages/Ultrasyd/187003148018697 http://ultrasyd.free.fr/ SFA (DE) - VISUALS SFA is an animation bureau that was founded in 2006 by Jon Frickey and Till Penzek. We focus on developing new concepts and scripts for animated productions. To date, we have written and produced over 50 satirical shortfilms on political issues. We also produce explanatory animations on scientific or cultural topics. Apart from commissioned work, we make shortfilms for festivals, the web and for the sake of it. And if you happen to visit an evening event that offers VJing by SFA, you’re in for some terrifying fun. http://www.sfa-zentrale.de/ Computadora (DE) - DJ The sounds come from C64, Amigas & Ataris and the passion comes from the early computer demoscene fanaticism and extensive performing as part of various punk / hardcore / IDM / electro-constellations through the years. Born in Hamburg, 1976 he discovered the illegal computer scene in Germany and was quite obsessed with it until the mid-90s when he began producing with Amiga computers and focusing primarly on music. In 2008 he takes over Bleepstreet Records and starts DJing and promoting dancefloor Chiptune sets mashed up with sweaty Electro and Techno around European Party Nights. http://soundcloud.com/computadora http://www.bleepstreet.com/ Debmaster (FR) - LIVE Julien Deblois may look like a gifted chemist trying to find the answer to the universe origins in his test tubes. Mixing crazy beats from all kinds of music movements, he offers intense dancefloor anthems. Let him alone in a studio for a week and you’ll get a new series of them. Let him there with his mates Curse Ov Dialect, Thavius Beck, Subtitle and you’ll get a full EP ready to rock your world. Along with Débruit, Fulgeance, Nil Hartman and, before them, dDamage, Debmaster belongs to a neglected era of French Touch. Far from cheasy and catchy tracks as well as from dark IDM, these artists prove that you can dance, sweat and be curious at the same time. http://www.debmaster.org/ http://soundcloud.com/debmaster JMAA (ES) - LIVE Juan Manuel Arroyo Alcon (JMAA for short) is an independent music and general artist born in September 4th 1989, in San Sebastian, Spain, raised as a person with Asperger Syndrome. His musical career was actually a hobby around and since 2010, where he produced alone albums and tracks. His step into internet recognition came with Inferno, where he composed tracks based on Electronic Arts' and Visceral Games' "Dante's Inferno" game, mentioned in Twitter by Visceral itself. Later, his music has been known by tracks as Pain is Cupcakes or Saxton Hale. After that, he was influenced on homosexuality in his tracks, as in Paint the World Pink in 2012. He dedicates mostly to the remix culture, breaking the taboos of copyrights in music to contribute to the Internet culture. And yet he keeps going as a quite potent internet figure rising from anonimity. http://jmaa.bandcamp.com/ http://www.facebook.com/JMAAMusic