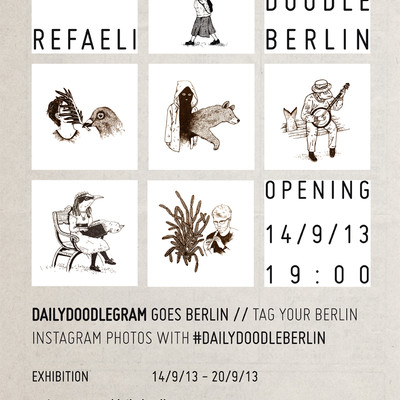 Urban Spree Gallery invites you to the vernissage of Tel Aviv based illustrator Geffen Rafaeli and her original artwork based on a concept developed from Instagram, the 'Dailydoodlegram'.

Everyday, Geffen chooses a few elements that inspire her from pictures instagramed and hashtagged #dailydoodlegram, and then combine & recreate them into a daily Polaroid-size original illustration.

With #DailyDoodleBerlin, the local hashtag of the exhibition, the project becomes local and Berlin is the first city where #dailydoodlegram will become a live experience. Geffen will draw original illustrations from the Berlin pictures as she is doing it on a global scale and through this first experience, will propose a vision of the city, a vision propelled by its inhabitants.

• ”I almost always look for pictures with objects rather than landscapes, something with a focus rather than a panorama. Usually I choose pictures of an object or animal or a figure that can be removed from its context.” Geffen Rafaeli in Haaretz

• ‘It’s the removal from context that turns these irreverent sketches into art — the way Refaeli can see possibility, magic and weirdness in even the most mundane snapshots.’ Flavorwire

• "I take screen shots of the photos in which I find some object or situation that intrigues me and I collect them during the day. During this process, I usually start to see a link in my mind between the images, and start to build a story." Geffen Rafaeli in InstagramBlog

Opening the 14th of September at 19:00 with the presence of the artist.