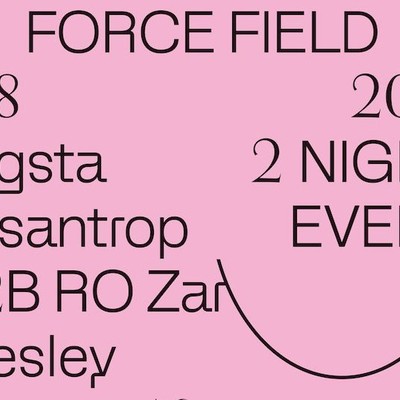 This time for the course of a full weekend, Force Field is insanely excited to present Gigsta and Aquarian, both masters of their own distinct sounds.

Host of Cashmere Radio's Frictions show Gigsta + recent Bedouin Records’ signee Aquarian, will be presenting two very different interpretations of bass-heavy sounds, from skeletal riddims to juicy bangers and beyond. Our one-off weekend will also be presenting several debuting projects: Two first-ever duo sets by Aquarian b2b RO Zar + a first Force Field resident b2b between RO Zar and Misantrop (latter of who will also be playing a solo set). Finally we’re excited to present Wesley, geriatric-digger yet tenderfoot-DJ, Force Field confidant Jonathan Clark. GIGSTA (03.08) A regular host on Cashmere Radio with her show Fictions, Gigsta has been working across many fields of musical theory and practice over the last decade. She is currently writing a PhD on Techno Criticism and spends all of her time away from the library, dancing, playing and digging for sounds. Her sets bring together a variety of genres and she explores different tempos, rhythms, colors and sounds with a specific fascination for lower frequencies. AQUARIAN (04.08) Aquarian makes raw, arresting and immediate music aimed squarely at the dance floor. His sound draws from both sides of the Atlantic, combining Drexcyian electro, old school jungle and UK grime with vertical singularity. The Canadian born, Brooklyn/Berlin based artist broke out with a trio of records for UNO NYC, with his 2014 self titled EP cementing him as an artist to watch while landing him a mix on Resident Advisor’s coveted podcast series. Since then he has released records through his own culinary-rave imprint, Hanger Management (described by RA as “Aquarian at his best: searing club melodrama, built from whip-crack breaks, ground-splitting bass and acrid techno adornments), also releasing a lauded experimental cassette for Quiet Time Tapes, a standout track on Allergy Season x Discwoman’s Physically Sick compilation and mixing for Rob Booth’s Seminal Electronic Explorations series. 2018 saw his debut collaborative EP with Deapmash (Leisure System) as AQXDM on UAE’s Bedouin Records with early support from the likes of Ben UFO, Objekt, Avalon Emerson, Dax J, and Emmanuel and championed by the likes of Pitchfork, Mixmag and Resident Advisor. The former wrote: “...scrupulously de-signed, hi-def...crisp and propulsive, “Aegis” is more than a slice of dark and unforgiving techno; it’s some sorely needed dancefloor euphoria.” FORCE FIELD Force Field is an event venture gathering the sonic perspectives of selectors RO Zar and Misantrop. Anything goes—it's a vibrant melting pot of divergent sounds and disparate tempos, orbiting around bass diasporas, off-kilter riddims, the hardcore continuum, a spectrum of euphoria, modern angularity, oddball gems, and further filth. Cheeky fun for the dancers who like to be kept on their toes.