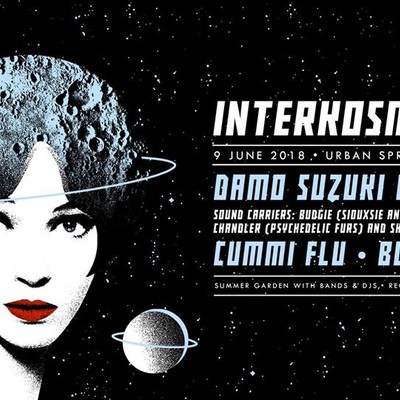 MAINSTAGE (Indoor venue) DAMO SUZUKI NETWORK with TAU and Joe Dilworth (Cavern of Anti-Matter and Stereolab) Cummi Flu BLUE CRIME DJ Oscar Valentine from 8MM Bar Visuals by CineMata (aka Mattia Grigolo) GARDEN 17:00 Schlafwagen - First Set 19:00 Schlafwagen - Second Set Dj Wahid Paradis and Low Bat, food trucks, and much more. DAMO SUZUKI Former lead singer of the legendary and seminal german krautrock band Can, Damo, resident in Köln (De) since the 70s, has been performing since mid ´97 with his project DAMO SUZUKI´S NETWORK around the world with more than 7,000 different musicians in 43 countries. He will bring his project this year at the 3rd edition, and first summer one, of the Interkosmos festival. A festival focused on several forms of music: experimentation, electronic, krautrock, drone, post punk, impro. Damo will perform with TAU from Berlin. CUMMI FLU is the latest incarnation of the ever-changing multimedia illusionist Oliver Doerell. Born in Brussels, he was the driving force behind the electronica projects Dictaphone and SWOD, and a sound box in Raz Ohara’s Odd Orchestra. There was once a pop music genre that was not actually a genre. It emerged in the late nineties and early 2000s. It was called 'electronica'. This genre was no more a genre than 'indie' or even 'pop'. Electronica was a term simply used to define club music, ambient or noise. It referred to a compartmentalized and, for the most part, friendly listening music that was not good to dance to. As a result, a wide range of musical styles came to be classified under this non-genre just because there was no other suitable classification at the time. And now Oliver Doerell is producing music that sounds like a late electronica manifesto. BLUE CRIME’s stars have a gloomy shine, inspired by myths and dreams and parallel universes. Earth felt too low; space is the place. They started out as a glowworm in a dark atom shelter, and emerged as eerie moonpop, growing grittier in time. Call it moonpsych, noisefolk, call it earthquakes with guitars and vocal eclipses. Or just feel it, and call it nothing at all. Be it love or hate, dark or light… Blue Crime shows no mercy for the sober and cold-hearted.   +++++ FB Event