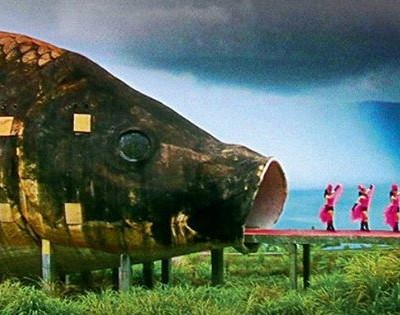 THE ACT OF KILLING is a difficult film to get you to come and watch as it’s one of the most confronting documentaries I've ever seen. Not all films are designed to entertain you so I urge you to venture outside of your comfort zone.

Director Joshua Oppenheimer’s documentary revisits the mass genocide in Indonesia during the mid 1960's. The leaders of the death squads responsible for the murders were idolised and became national heros. Not only does Oppenheimer interview these men but he has them re-enact the mass murders in the style of their favourite films. With these surreal and sickening recreations we watch a dark history mixed with imaginations of mass murderers unfold in the styles of American westerns, gangster films and musicals.

“Like all great documentaries, The Act of Killing demands another way of looking at reality. It starts as a dreamscape, an attempt to allow the perpetrators to reenact what they did, and then something truly amazing happens. The dream dissolves into nightmare and then into bitter reality. An amazing and impressive film.” – Errol Morris

“I have not seen a film as powerful, surreal, and frightening in at least a decade… unprecedented in the history of cinema.” – Werner Herzog