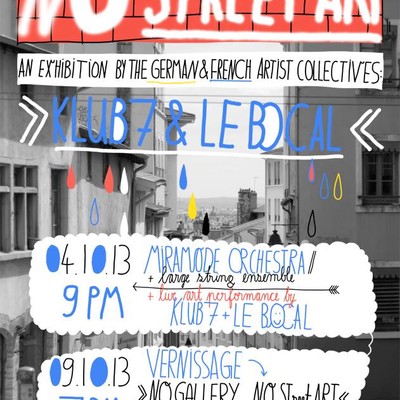 In Spring 2013, LE BOCAL hosted KLUB7 art collective in Lyon. Strong links were forged between both crews and the idea of carrying the work elaborated together naturally popped up. In order to experiment together and push further the graphic exchanges, both collectives came up with the idea of setting a second meeting, on KLUB7’s ground in Berlin. For their two forthcoming shows @ URBAN SPREE, they don't choose a gallery to show that, what is no street art. They invite you to a mix of drawings, illustrations, music, drinks and a family-like come2gether. One event is an live art performance - integrated into the concert of MIRAMODE ORCHESTRA. The second show is an exhibition focused on the graphic interactions between KLUB7 and LE BOCAL.

Vernissage NO GALLERY - NO STREET ART An exhibition by the german and french artist collectives KLUB7 & LE BOCAL. Both collectives work on drawings and artistic illustrations, yet using very different medias, and showing different graphic identities. They use drawing as a writing, and text as a graphic element. There is always a narrative content under the surface of their graphics, created by the juxtaposition of their styles. Despite or because of these differences, their work blends very consistently. 09.10.2013, 07:00 pm, free entry DJ-sets: Efalive of the Jazoburbs & Lupo aka Conrad Ostwald http://www.mixcloud.com/conradostwald/ https://soundcloud.com/efalive About LE BOCAL: LE BOCAL is a gallery and a studio space in Lyon in France, which hosts Lucie Albon, Delphine Perret, Tian and Matthieu Perret, authors and illustrators for publishing and press. Their work is mainly about narrative forms, either as images, illustrated books or comics. www.lebocal.org About KLUB7: KLUB7 is an Berlin-based artist collective developing their own trademark. The style ranging from illustration to typography and from handcrafted to editorial. KLUB7 creates murals and illustrations in a collaborative group performance, always interacting with each other's skills. www.klub7.de About MIRAMODE ORCHESTRA Mira Mode is an emerging collective of young musicians teaming with the Berlin based saxophonist and music composer Ede Merkel. The Mira Mode band counts twelve musicians; three brass-, five strings players and an entire rhythm section. Together they introduce an urban mix of genre spanning acoustic sound. Electronic influences are clearly audible, yet jazz, pop, funk and hiphop based grooves provide the breeding ground on which the spaciously arranged Songs of Mira Mode unfold. In various concerts, Miramode has featured a variety of vocalists from the Berlin scene. www.miramode.de