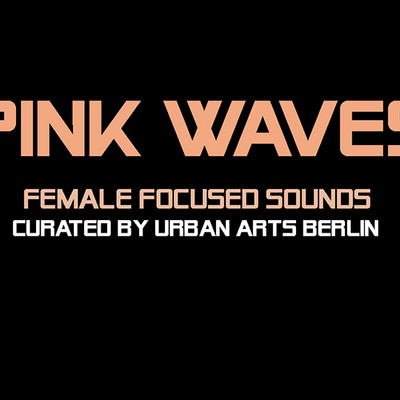 After a great resonance in 2016 Urban Arts Berin cellebrates this year International Women's Day with the excellent music festival PINK WAVES with an all female line-up at the legendary Urban Spree! PINK WAVES is a plattform for a diverse range of female artistic expressions including the dark and noisey side of popular music. We promote sound art, avant-garde & experimental music, but also pagan & ritualistic tunes as well as industrial & noise sounds produced by women and/or music projects that bring women to the front. For us is very important to de-construct the meaning of femeninity in traditional sense. This is why our program supports also women who hold a femenine-masculine approach. The PINK WAVES artists can be soft and quiet but also laud, irreverent and rebellious. We encourage those women who brake the clitche of femminity and to the ones that represent the noir side of polular music. PINK WAVES is a plattform where strong and talented women flourish for who they are. Let's make some noise!! LINE UP: BURKAMACHINES  (Germany) - Electronic Noise Founded in 2010 in Berlin by female artists Chris Dreier (ex Tödliche Doris) and Ursula Döbereiner the noise duo initially played under custom-made white or black burqas and filled various galleries and venues with their aggressive industrial-elektro sound, occasionally using automatons. The band refers to noise, ambient and new music structures adding rhytmic patterns and tape mash-ups to their modular space trips. https://vimeo.com/burqamaschinen CUBOP  (Germany) - Body Analogue Electronics & Ritualistic Music Cubop is one of the most talented avant-garde and ritualistic dark projects from Berlin. She has won a strong resonance in the fields of electro-acoustic and anolgue synthesis influenced by Delia Derbyshire, John Cage, Anne Gillis, COIL, Muslimgauze, SPK & Merzbow, among other interesting projects. Her works have being release by Lust Vessel (Japan), Hylé Tapes (Paris), Corpus Callosum (Leeds, UK) & the Urban Arts Berlin Label. Her sonic focus are dream territories, dark tales, alchemical sound, sonic sculptures, filmic soundscapes, ritualistic music, dark ambient & noise. She often displays her proficiency at playing a variety of instruments such as the legendary MS20, the Dark Energy Doepfer, Bass and the Micro Brute. She has produced a large body of soundtrack work for radio, film and performance, and, as Cubop, as a solo artist in her own right. At Pink Waves her new album "FLESH & DEMENTIA" will be presented live. https://cubop-berlin.bandcamp.com/ FAKE MISTRESS (Germany) - Experimental Vocalism Fake Mistress started as a singer of the dada-performance group The Fake Masters, but is now performing mostly solo. The classical trained voice is her instrument to impersonate various shapes of characters and emotions and thus creating a highly atmospheric music, evoking fragments of films, emotions and stories fusing it to a kind of modern symphony. The music she composes and performs live is a mixing of field-recordings, her own recordings of instruments and cut-ups of old classical orchestra music vinyls that have been processed, using Linux and open source programms only (Ardour). https://fakemistress.bandcamp.com/ MARTA ZAPPAROLI (Italy) - Analogue Imporvisation Italian experimental sound artist, improviser, performer, researcher and musician. She works and lives in Berlin since 2007. Her music mainly consists in strongly narrative sonic pieces that she builds using a wide variety of recording techniques, devices and selfmade microphones . She is interested on the boundaries and relations between real sound world ,vibration sound, noise pollution and inaudible sound . Although it could be qualified as abstract, Zapparoli's music reveal an accurate sense of nativity, she building strongly narrative and sonic pieces live through improvisation with real-time tape manipulation as scratch, back and forth, cutting, mixing producing rough sounds. Info: http://martazapparoli.blogspot.de/ N01R (Spain) - New Wave N01R is the echo of a moment, nostalgia embodied in music, video and photography, trying to capture all those feelings in sonic waves. The topic of the songs is usually about space in connection with the human being, and how we as a humans see ourselves in the universe. "Everything is sound, and everything influences us." It's like transmit the memory of something from the past or a dream, a vision of something beautiful and blurred. https://www.youtube.com/watch?v=C8NTKP09vVE https://www.youtube.com/watch?v=Ewy-lQ0uKvQ VIY - (UK) - Dark Industial Techno Viy is Vera Bremerton’s wilder techno-industrial side. Viy takes Vera’s experimental vocals and laces them with hard, fast, thundering beats and swathes of distorted synths. By means of stacked up layers of screams and noise, Viy seeks to achieve almost unbearable aural intensity. Cathartic, Dionysian, uncompromisingly feminine, her performances are an occasion for the audience to reconnect with their truer instincts. Viy was born and bred in Italy, and is now based in London, where she’s constantly on the prowl for new sounds to sample. Her first album “Amoris Vulnus” wants to denounce sexual violence by recreating the feeling of terror and anguish suffered by the survivors; she’s now working on an project dedicated to women’s affirmative sexuality. https://viytechno.bandcamp.com/ Friday, 10.March From 21 - 6 a.m. @ Urban Spree, Berlin FB Event