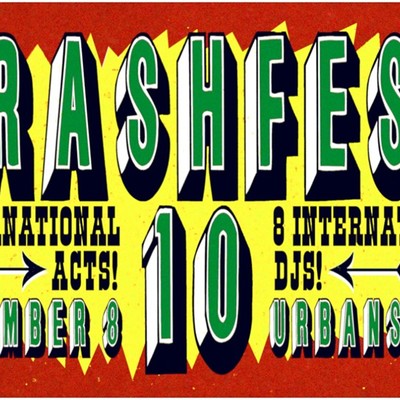 [youtube id="Nhxjs2yqTlo"] It is with with great joy, honour and anticipation that we announce the 10th Anniversary of Berlin's weirdest, wildest, and most legendary festival, TRASHFEST. FULL LINEUP ANNOUNCED: BANDS: Freak de l'Afrique (Berlin/ Man Recordings) Conjunto Papa Upa (Venezuela/Amsterdam, Names You Can Trust) Scúru Fitchádu (Cabo Verde/Lisbon) Mfa Kera and Mike Russell's Black Heritage (Madagascar/USA/Berlin) Conjunto Vaya Nacho (Berlin) DJS: Dj Anacaona (Caracas) j.do rio aka João Xavi (Rio de Janeiro) Sigourney Skywalker (Berlin) Dj Andi Stetcher aka Schladi Schladez (Berlin) Mohair Sam (Thessaloniki) Mayo-Ra (Spaghetti Western) Send the Friend (Thessaloniki) NESTA (PT) Jimmy Trash (AUS) Freak de l'Afrique is a Berlin based collective of Djs, Mcs and dancers who share a passion for modern African Club sounds. They are an energy EXPLOSION and full of legendary creatives and have worked alongside Goethe Institute and Redbull to be able to tour East Africa and Europe and spread their floor burning vibes. Conjunto Papa Upa is the latest band by "The Hardest Working Man in Tropical Music" Alex Figueira (Fumaça Preta, Music With Soul, VintageVoudou), alongside percussion meister Gerardo Rosales. Papa Upa is a latin rhythm machine, dipping into the grooviest parts of Venezuelan Afro, Salsa and Carribean heritage and then wrung through the psychedelic and dj culture processor you can expect from a Names You Can Trust band. Scúru Fitchádu Mixing anti-colonial punk politics, live and programmed drums and exceptional stage shows with the ancient rhythms of funana, the outlawed and ancient music from Cabo Verde, Scuru Fitchadu feels like Death Grips if they grew up inthe island pennisula.....It's their first gig in Berlin and we are honoured to host them. Mfa Kera with Mike Russell and Black Heritage Some years ago I was digging in Amsterdam and found an amazing LP with an astonishing face of the artist on the front cover. It was the amazing Mfa Kera, who I interpreted to be something like a Madagascan answer to Nina Hagen.... and it quickly became my favourite new wave album of all time. A little investigation found she was living in Berlin, and still going very strong with many musical and artistic projects. I'll post more of this story later but for now, I am BURSTING to present to our Trashfest audience, MFA KERA will be performing with a full afrobeat band!!! Conjunto Vaya Nacho This Band is based on the affection of Colombian Vallenato Music. Rocking an accordeon, bass, 1973 drum machine and guest singers, we are very happy to have these locals join us. j.do Rio aka João Xavi I have a perverse pleasure in the wild in-yo-face electric boogaloo of 80s-90s Baille Funk and Miami Bass, so I personally invited specialist J.do Rio aka João Xavi of Batuque Lowfi. He has made a mix just for us, listen and wig out and understand how fun this will be in the Urban Spree basement on the night of Trashfest !!! Dj Anacaona is also a Venezuelan émigré to Berlin's tropical music scene with connections to the La Regla Party here. After being in all of the rebellious music scenes of vibrant Caracas; Hardcore, Reggae, Hip Hop - she brings the same attitude to her heavy bomb salsa mixes which you have to hear to believe. Dj Andi Stetcher (Schladi Schladez) Andi Stecher is an austrian born and berlin based drummer and electronic musicia and DJ Andi Stechers music is not drawn to one specific genre. He refers to a variety of styles of music in his pieces and therefore forms a very unique hybrid sound. His music is often interspersed with polyrhythmic elements, field recordings, coupled with drones, subbass, analog electronics and electroacoustic elements. We are deeply indebted to Musicboard Berlin for helping us to set up this incredible event, as well as our longterm partners Urban Spree. Poster art by Mohair Sam. Follow our Instagram Additional Sponsors: Roots Café Berliner Berg It goes without saying Trashfest is an open space free of discrimination and any sexist, racist, homophobic or transphobic behaviour will get your ass kicked out. Can't wait to see you all there <3 <3 <3 FB EVENT & Tickets here