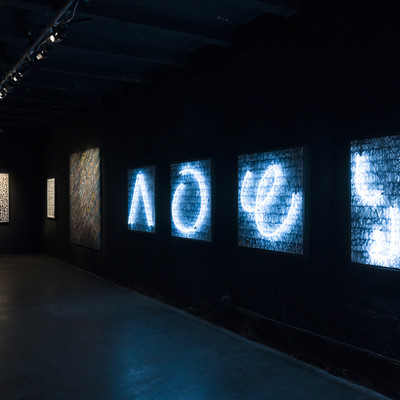 LETTERS focuses on European and Mediterranean artists whose practice is strongly influenced by their graffiti years, past or current, their passion for painting, lettering, abstraction, and the use of brushes.

This first chapter covers artists nourished  by the classical European calligraphy tradition (roman, runic or cyrilic scripts) as well as arabic calligraphy, but first and foremost by their contemporary practice of muralism and abstraction: muralism or « street art » is an integral part of the practice of « calligraffiti » – the holy alliance of calligraphy and the urban landscape, shaped by graffiti, whereby speed, precision and abstraction converge to give birth to this particular urban flow.

Whereas letters and alphabets are consubstantial to graffiti, urban calligraphy diverges with the use of a particular reference to traditional calligraphy and use of specific contact tools like brushes instead of aerosols.

Artists are using calligraphy as a materia prima. However, the final result is a substantial evolution from the traditional corpus of calligraphy with serious inroads into abstraction, where letters are turned into abstracted shapes and signs, dissolved, essentialized, obfuscated and cyphered.

LETTERS is a show about post-calligraphy and post-graffiti. About signs, mutations, strokes and freedom.