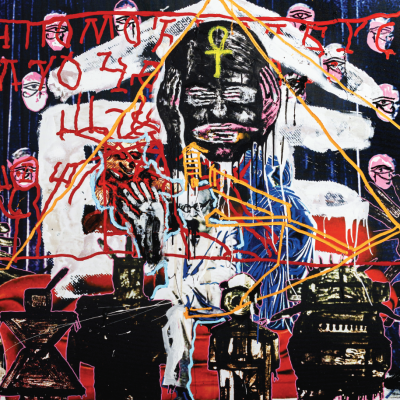 From October 23rd to January 23rd 2021, Urban Spree Galerie is pleased to offer the painter Orsten Groom his first solo exhibition in Germany, "CHROME DINETTE". The Gallery is closed until January 31st, 2021. Only by appointment (contact@urbanspree.com)

As a radically independent artist, Orsten Groom has established himself in a few years as a key player in the young French painting scene, navigating between alternative circles and institutions. His first retrospective was presented this year at the ACMCM contemporary art centre in Perpignan (France) - at only 37 years old. The Berlin exhibition brings together over thirty works, presented in two sections: - the Large Ensemble of 18 paintings "CHROME DINETTE", a crazed round about the links binding Sigmund Freud and Moses through Ancient Egypt & Sick Poodles - all under the aegis of Frank Zappa; - A vast Recapitulative Selection of Orsten Groom’s emblematic large formats, a genuine subconscious journey with Parietal Sarcophagus allures.

Orsten Groom's painting is presented as "Post-Historical Cave Art". The German artist Jonathan Meese said about him: "Orsten Groom comes from the caves and the Middle Ages and keeps history alive in today's art. He comes from the future". Apocalyptic Frescoes, saturated with Creatures drawn from the Memory Styx by Demented Talmudic Investigations, Carnivalesque Recapitulation of History from the Flow of Origins and Art History - His Painting roars on Large Canvases populated with Figures entangled by Mythological and Grotesque Archetypes, Dances Macabres gleaned by a Language Detective, an Amnesiac Epileptic Archaeologist. Its Material is Dense, Volcanic, inhabited like the ancient Livers of a Divinatory Ritual. «This turmoil is similar to the one I feel in the Grottos of Lascaux or Chauvet, in front of El Greco or Picasso paintings, or, in the 20th century, facing the essential work of Gérard Gasiorowski», wrote Olivier Kaeppelin, Curator of his recent Parisian Exhibition POMPEII MASTURBATOR - For which the Archaeological Park of Pompeii itself has send a complaint. Orsten Groom experienced in 2002 an aneurysm that left him amnesic and epileptic. He graduated from the École Nationale Supérieure des Beaux-Arts de Paris in 2009 and Le Fresnoy in 2011. He is the recipient of several awards: Prix l'art est vivant (2019), Prix de Peinture de l'Académie des Beaux-Arts (2016) and Prix de Peinture Antoine Marin (2015). The reputed paint manufacturer Marin manufactures a colour to his name, the Pink Groom. He is also a musician, author of collections of English cubist poems, filmmaker (Jury Prize for his film BOBOK at the 2011 Côté-Court festival) and since 2012 author of the video cycle Les Ballets Russes. He has collaborated with curators and authors Olivier Kaeppelin and Paul Ardenne, the filmmaker Guy Maddin, the translator and poet André Markowicz, as well as the writer Boris Wolowiec.