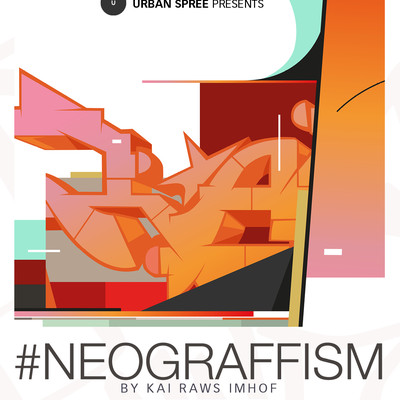 Urban Spree Galerie presents "#Neograffism", the first solo show of the Berlin-based post-graffiti artist Kai "RAWS" Imhof with Urban Spree. In "#Neograffism", a term coined by the artist as being representative of his studio philosophy, RAWS strips down his years of graffiti practice and complexity build-up to lay bare the basic essence of graffiti through color and shape in a visually stunning arrangement of colors, contrasts, and gradients.

RAWS explores the tipping point where the core aesthetics of graffiti, after being deconstructed and re-arranged, becomes acceptable as a form of art while retaining its purity. The artist uses a mixed technique in his studio works, using both the spray can and the acrylic brush, as a hybridation of both worlds, the studio and the outdoor.

"When it comes to design, I try to combine my preferences for letters, graphics and minimalism in my work. Many of the works were done using acrylic paints and spray cans. The use of these media also emphasizes the duality of graphics and graffiti. In my canvases I have mostly worked with gradients. These are created exclusively with aerosol and can be a symbol of the movement and transience of graffiti." In his "Black Series", writing his name becomes a subdued background while the colorful gradients are windows to his artistic world.

Biography:
Kai “RAWS” Imhof (b. 1990 in in Königs Wusterhausen) is a Berlin-based German graffiti artist and graphic designer.

RAWS started painting graffiti in his neighborhood in his early teens, extensively bombing the city from 2004 to 2008, where issues with law enforcement led to the start of his studio career. Trained as a graphic designer at the Best-Sabel Designschule in Berlin, RAWS is also an accomplished designer, having designed products for Reebok, Marvel, Nike, the fashion designer MarcCain, MontanaCans, Über-Skateboards etc. [caption id="attachment_17084" align="alignnone" width="886"]

Marvel's Spider-Man: Graffiti backgrounds for the PS4 game[/caption] In parallel, RAWS paints murals all over the world and participates to group shows since 2017 ( The Haus in Berlin, Monumenta in Leipzig, or Wandelism in Berlin). #Neograffism is his first solo show. https://www.instagram.com/rawsofficial/ [caption id="attachment_17093" align="alignnone" width="884"]