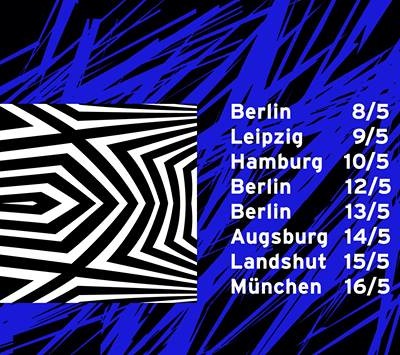 ANTIME is incredibly excited to announce that the upcoming tour of AAAAand ˆL_ will include a two-day workshop to be held in Berlin’s Urban Spreeon May 12 and 13. The workshop, lead by ANTIME founder Martin Steer (alias Midimúm), will explore different means of music production, the interplay of sound and visual aesthetics as well as strategies of self-promotion in digital culture. What started out as a net-based label has over the last three years increasingly grown into an international network that pays as much attention to the music released by it as to the possibilities of bringing together sound and other arts. ANTIME celebrates diversity on many levels: culturally, artistically and of formats. The upcoming Germany tour of the Mexico based producer AAAA, whose debut album »Shiva Watts« will be re-released on vinyl in early May through ANTIME, and the Brazilian sound artist ˆL_, whose new EP »The Outsider« is set for a release in early June as a 12” vinyl on ANTIME, will gather two like-minded minds with distinctively different approaches to music production. In the course of the two-day workshop, AAAA will provide insights in the world of analogue music production while ˆL_ will present his unique sampling techniques and digital working methods. ANTIME’s in-house graphics team will meanwhile introduce ways of visualising sounds and ANTIME’s publicist Kristoffer Cornils (alias konkrit) will illustrate various ways of self-promotion in digital culture. As a whole, the workshop aims at making music production transparent, offering an understanding of transmedial methods and developing economic strategies for emerging artists. The two-day workshop, which is to be held in the afternoon on May 12 and 13 in Berlin’s Urban Spree, aims primarily at teenagers, but will be non-exclusive according to ANTIME’s philosophy. Please note however that the workshop’s capacities are limited and an early registration before May 8 through info@antime.de is strongly recommended.