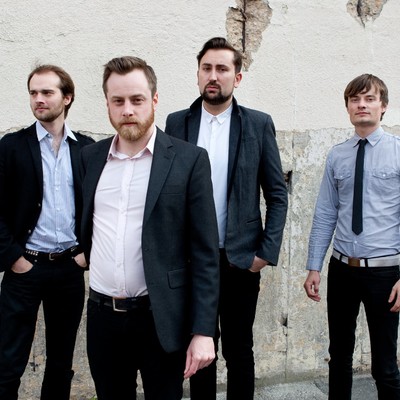 I LIKE TRAINS-------------
According to I Like Trains (aka: iLiKETRAiNS), humanity is down under the hands of environmental and technological factors far beyond us. Guy Bannister, Alistair Bowis, Ashley Dean, Simon Fogal, and David Martin from Leeds show how the dark chapters of human history in particular keep repeating themselves until humans wreck themselves. In doing so, I Like Trains represents a group that stood out from the crowd even as their adopted hometown of Leeds experienced hype in the mid-noughties that drove them into bankruptcy. Even during the "New Yorkshire" era, they were never really fashionable: too dour, too gritty, too stubborn to follow the preconceived narrative imposed on them by their critics and peers. They didn't care about escapism even as they traveled through an age of it; their albums have dealt head-on with anxieties that most people prefer to shut down, turn around and click away, prolonging and amplifying the inevitable effects of reality. Not least with their latest album "KOMPROMAT" from 2020, they were able to convince fans and critics once again of their vision and bring the critical issues into focus.

Also live, I Like Trains have been an exciting and unique act for years, sweeping the audience along. Be there and enjoy an evening full of indie rock with depth and statement on 25.10.2022 at Urban Spree in Berlin.
https://music.iliketrains.co.uk/

+++ ATTENTION +++
The shows for Leipzig and Berlin on 24 & 25.10.22 are new events, as the previous promoter has ceased operations. The tickets of the previous events are not transferable. Tickets already purchased will be reversed via the ticket platforms of the previous promoter. For the new, now valid, events it is necessary to buy a new ticket via our ticket links. (sorry guys, we can't change that unfortunately).