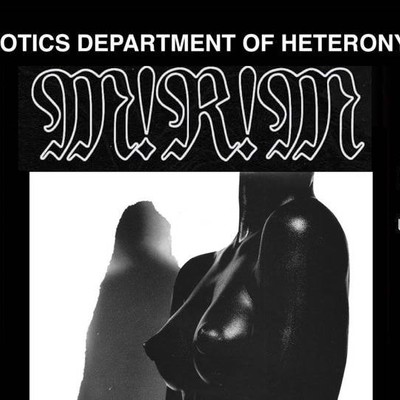 aufnahme + wiedergabe presents:
SDH - Semiotics Department Of Heteronyms (Spain) live
[Avant!]
techno-meets-new wave
www.semioticsdepartmentofheteronyms.bandcamp.com
www.facebook.com/semioticsdepartmentofheteronyms
M!R!M (Italy) live
[Avant!]
weirdo lullabies for broken hearts.
www.m-r-m.bandcamp.com
www.facebook.com/jackmilwaukeegoessolo
aufnahme + wiedergabe DJs
www.aufnahmeundwiedergabe.de
www.facebook.com/aufnahmeundwiedergabe
Two years after their previous Against Strong Thinking mini album, Spanish techno-meets-new wave duo SDH returns with a new, killer EP.
There is a duality rooted deeply in the very soul of this project that is reflected in the line-up as well as in the music the band creates.
While Sergi Algiz is behind the machines propagating a wide spectrum of electronic beats ranging from techno and body music to synthpop and electro, Andrea P. Latorre offsets the night club vibe of the pounding drums with her emotional, romantic vocals. This same dichotomy is perfectly represented here by their new 12-inch Maybe A Body, out April 29, 2022 on Avant!.
The title-track is a powerful song about body recognition, about having a voice and using it, sustained by some throbbing EBM with traces of 90’s trance/progressive, ending up in a perfect balance of rousing groove and hypnagogic feelings.The B side is the hunting ground for more dream-like scenarios as it digs deep in the nostalgia realm with its retro mood filled with italo and synth-pop bliss. To power up both these aspects of SDH’s identity, we have called two of the best electronic producers out there to remix one track each.
Maybe A Body has been given to techno golden boy and Avant! alumni Phase Fatale who has managed to enhance even further the trance-like nature of the track, creating just the perfect dancefloor filler. All Of That has been instead reworked by the skillful hands of the rising star of the Eighties sound Pablo Bozzi who literally exploded the italo groove, occasionally smoothing things out with some breakbeats just where they’re most needed.
---
Two years and one pandemic after his previous release, the Italian, London-based solo project M!R!M is back with a new full- length album.
Inspired by the synth pop classics, as well as from cold and dark waves, multi-instrumentalist Jack Milwaukee has been releasing material on labels such as Fabrika and Manic Depression until his first record on Avant! ''The Visionary'' back in 2020.
On April 22 his fourth LP ''Time Traitor'' will be released and we’re excited to say this is Milwaukee’s most personal job to date. If you are familiar with his work, you know the DIY/lo-fi approach of his first recordings was already gone with his previous LP but these new ten recordings dig even deeper, drawing the outlines of a fantasy world lost within the foggy memories of a collective childhood. Possibly locked in his bedroom for the necessary time, Milwaukee has been able to recreate an imaginative realm of 80’s FM suggestions, scattering a number of acoustic clues from different parts of this parallel, yet so familiar dimension. It’s almost like M!R!M is sending us a message in a bottle with each of these new tracks and each message tells a different story. Post Fight has a punchy pop-punk riff drove by solid synthwave beats, Faultless Pitch hosts a mellow, funky bass line over a solemn drum gate, Desert Love screams italo like nothing else and it was indeed composed four-handed with fellow artists Nuovo Testamento, Say Nothing features SDH singer Andrea Pérez’s backing vocals to invoke a dream-like scenario.
There is even a Turquoise Days' Grey Skies cover that is just one more perfect example of Milwaukee's ability to take a single item from the suitcase of the past and make it extremely current in a handful of minutes. All this is adorned by semi-instrumental postcards with suggestive names such as Moody Moon, Peninsula and Goodnight Galaxie that will guide you through this journey across M!R!M sound-&-memory experience.
Tickets:
https://ra.co/events/1594120
https://www.koka36.de/sdh-semiotics-department-of...
Urban Spree (RAW-Area)
Revaler Str. 99/Warschauer Str.
10245 Berlin
www.urbanspree.com