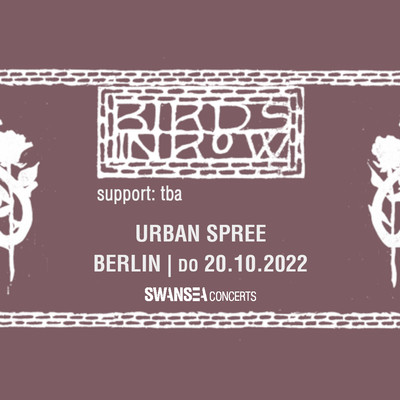 The trio of Birds In Row has been at the forefront of hardcore punk for a decade. Their first album "You, Me & the Violence" from 2012 catapulted them from unknown musicians from the French province to the world stage. The infectious chords and venomous vocals brought classic hardcore in fresh form to a new generation.

While that debut fired listeners' imaginations, 2018's follow-up, "We Already Lost the World," was an unrelenting inferno of ideas and playfulness. Metal Hammer UK called it "intelligent, poignant art" and wrote that "this downward spiral changes pace and weight at every turn." The work cries out for mutual respect in a world of increasingly extreme political divisions, and uses punk, post-hardcore and post-metal to convey that cry. After their last tour supporting Alcest in February/March 2020, the band retired to work on the next album.
They are now ready to return to the stage with a brand new live show and tear down the Urban Spree in Berlin on their European tour on 20/10/2022. Best get your tickets quick!