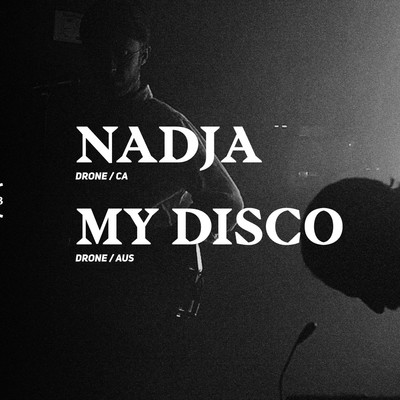 Imagine a sculpture: massive, but simple, elegant, almost elemental.Now, imagine it sat at the center of a cavernous room, lit by nothing more than the faintest traces of sunlight. Think of the space it occupies. More importantly, think of the space it doesn't. That, more than anything, is what MY DISCO evokes with their music: space.
MY DISCO was formed in 2003 in Melbourne, Australia, by brothers Ben and Liam Andrews (both originally from London) and Rohan Rebeiro. Since their inception, the Australian trio has chipped mercilessly away at any elements of their post-punk aesthetic they might deem to be superfluous, while retaining an immense physicality of sound that has become something of a trademark.
https://mydisco.bandcamp.com/
https://www.instagram.com/meine_diskothek/
Nadja is a duo of multi-instrumentalist Aidan Baker and bassist Leah Buckareff—active since 2005—and making music which has been described as ambient doom, dreamsludge, or metalgaze, a signature sound which combines the atmospheric textures of shoegaze and ambient/electronic music with the heaviness, density, and volume of metal, noise, and industrial.
The duo has toured extensively around the world—including performances at such festivals as SXSW, Roadburn, Donaufest, Le Guess Who, Incubate, and Unsound—and sharing stages with the likes of Earth, OM, Khanate, Tim Hecker, Ben Frost, and Godflesh.
https://nadja.bandcamp.com/
https://www.instagram.com/nadjaluv
THE SHOW IS OF THE BIG SONIC POWER AND IMPACT - BRING THE EAR PROTECTION WITH YOU.