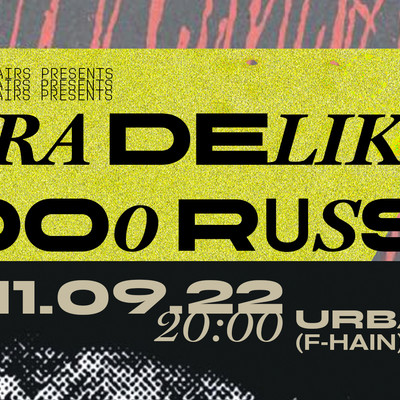 Psychberg Affairs is very proud to present 10,000 Russos and Kara Delik.
>10 000 Russos< OPOrto, PT
The Russos are formidable force within modern psychedelia; their industrial psych/post-punk has been charming fuzz-heads across the globe with its stomping, shamanic mantras and otherworldly krautrock slant.
During the last 9 years, the portuguese band produced 4 LPs (3 on Fuzz Club Records) as well as split records with the likes of Oscillation and RMFTM. They toured heavily with 6 europeans and 1 mexican tour as well as presence on the principal festival within their genre.
During 2020, Russos had changed one band member (André Couto on bass left, Nils Meisel arrived on synths), changed their sound direction and recorded one LP, that will be out on Fuzz Club in September 2021.
Bandcamp:
https://10000russos.bandcamp.com/
>Kara Delik< BERlin, DE
Which mean "Black Hole" in the Turkish language gather a very interesting proposal to how post punk has been done through the years of post punk production.
Kara Delik combines driving yet complex rhythms, gritty basslines and hints of traditional Turkish folk music. Inspired by the Anatolian rock music of the 70's, German Krautrock and Punk of the 80s, and their diverse experiences in Berlin's lively off-culture. At times experimental, post-punk, with a touch of shoe-gaze, they bring a fresh approach to alternative music in the city.
Bandcamp:
https://karadelikband.bandcamp.com/
-------------------------------