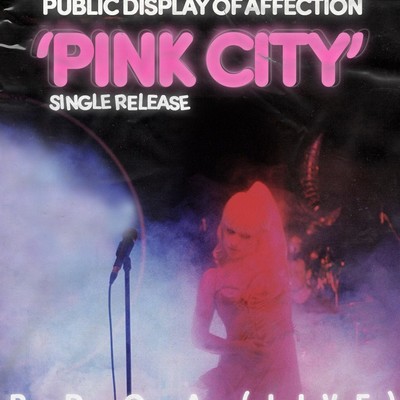 MILK ME and Goodlive Artists presents:
Public Display Of Affection
https://youtu.be/JLq6I2BafFo
https://youtu.be/CK6mf84mIyM
For the voyeur in all of us, P.D.O.A. (Public Display of Affection) have arrived. Conceived as a mixed media art project by Jesper Munk and performer Madeleine Rose (of dance theatre collective Das Gegenteil), the pair soon expanded to include Welsh film maker/ punk prophet Lewis Lloyd (Plattenbau) and ‘real life’ Berliner Anton Remy (Baketown). Playing their part in keeping Germany’s capital weird, P.D.O.A.’s live shows hark back to the fearless eccentricity explored by the West Berlin performance art and music collectives of the 1980’s. Similarly determined in their indefinability the group entices their ogling audiences with a novel brew of punk wonk, dramatic duets and kinky jazz.
Clearly attempts at description prove futile, producing nothin’ but a genre buzzword mush. Nevertheless, what P.D.O.A. guarantee is an act of near zen like non duality, hittin’ that golden ratio between the soulful and the sinful, the familiar and the far-out, the harmonious and the chaotic. So go on, take a peep!
Schwund
https://derschwund.bandcamp.com/
Schwund is a Berlin synth punk musician inspired by the NDW of the early 80s. Active in the Berlin underground for years, he drew attention to himself the past two years as one half of the wave-punk duo DAS DAS. He is also the drummer of the Berlin punk band MASKE. On his new release "Dieezer Tübe" ("this guy"?) danceable rhythms and driving basses are again paired with weird synth melodies and insidious earworms from dadaistic surreal lyrics. The sound is created live from fully analog equipment, which is sometimes tortured to the extreme. Not infrequently, punk and noise flash up in Schwund's live set.